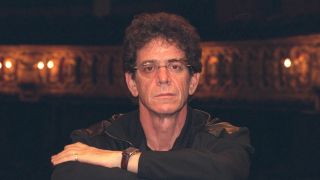 Lou Reed, a founding member of the Velvet Underground and one of the most influential figures in rock 'n' roll, died today at the age of 71. The cause of his death has not yet been released, but Reed underwent a liver transplant in May of this year. In July, he was hospitalized due to severe dehydration.

Along with multi-instrumentalist John Cale, drummer Maureen Tucker and guitarist Sterling Morison, Reed founded the Velvet Underground in New York in 1965, where they quickly drew their attention of Pop Art star Andy Warhol. Warhol incorporated the band into his Exploding Plastic Inevitable. "Andy would show his movies on us," Reed said. "We wore black so you could see the movie. But we were all wearing black anyway."

After leaving the Velvet Underground in 1970, Reed embarked on a successful and diverse solo career, issuing albums that ran the gamut from mainstream rock (1972's Transformer, with the Manhattan anthem Walk On The Wild Side) to art-rock opera (1973's Berlin) to experiments in noise terror (1975's Metal Machine Music).

Reed, who had a history of drug use, married twice, first to British designer Sylvia Morales in 1980 and then to performance artist Laurie Anderson in 2008. Over the years, Reed and Anderson have collaborated and performed together while also participating in various civic and environmental charities and projects.

Always wildly eclectic, in 2005 Reed released a double-CD titled The Raven, based on the works of Edgar Allen Poe and featuring spoken-word contributions from David Bowie, Anderson, Christopher Walken and Steve Buscemi; and in 2001 he collaborated with Metallica for the much-panned (but not by MusicRadar) art-metal album Lulu.