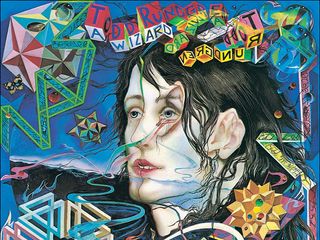 The cover painting was by Arthur Wood, fact fans

Todd Rundgren has announced that he's to play A Wizard, A True Star, his seminal 1973 album, in full at London's Hammersmith Apollo on 6 February 2010.

This experimental prog rock opus has become a highly regarded touchstone for a diverse range of bands.

Originally the doyen (and sometime producer) for guitar acts such as Kiss, Cheap Trick Motley Crue and Aerosmith, Rundgren has recently been adopted as the hip name to drop by the likes of Klaxons, Simian Mobile Disco and Daft Punk.

Rundgren's most recent wave of interest has come thanks to the spoken lyrics from his song Intro (from Something/Anything? (1972)) being sampled by Hot Chip for Shake A Fist.

The first half of the Apollo gig will feature a selection of Rundgren's songs from throughout his career, while the second will be devoted to A Wizard, A True Star.

Both of A Wizard, A True Star's 'sides' run as medleys, making its performance as a whole all the more appropriate.

Non-UK performances have also been announced at The Paradiso, Amsterdam (8 February 2010) and Akron, Ohio (6 September 2009). Line-up changes are expected for the 2010 European dates and further A Wizard, A True Star dates haven't been ruled out.