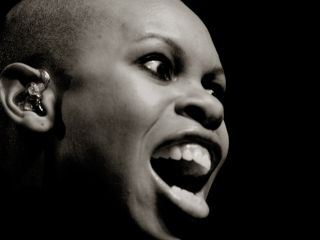 Skunk Anansie: back on the advice of a dog (Image credit: Simone Cecchetti/Corbis)

The members of Skunk Anansie have reformed and recorded a new album because of a talking dog.

That, at least, is what bassist Cass told the BBC's Newsbeat:

"My Dog. He kept telling me and I had to persuade these people that I wasn't mad".

Frontwoman Skin had other ideas, suggesting that it was actually their fans who had brought it about. She said: "They've been on our case for years for us to do this".

The band have a greatest hits compilation, called Smashes And Trashes, coming out on 14 September. But fans (and talking dogs) will get new material too.

Skin explains: "There's just a different kind of energy. There's not like a rehash of what we did in the '90s - they're more fierce. We're not trying to copy what we were doing before. We're seeing it as a new band".

A new single Because Of You is out in September with a UK tour in the autumn.