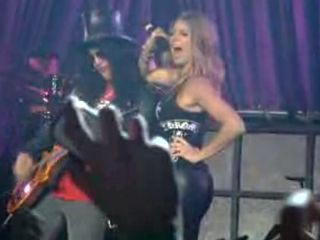 Slash must like some humps as much as the next guy.

To the surprise - no, gasps - of thousands at Sunday night's Fergie concert at the Pacific Ampitheatre in Costa Mesa, California, the legendary axeman joined the pop princess for a mini-set of ragged but spirited rock 'n' roll.

When welcoming him on stage, The Black Eyed Peas's singer paid tribute to her hero - introducing him to some of her younger fans. "I know someone who likes to fucking rock 'n' roll! Some of you little ones may know him from Guitar Hero, but I know him from a band called Velvet Revolver and a band called Guns N' fucking Roses!"

They made for quite a pair: Slash in his trademark attire, and Fergie wearing painted-on black leather pants.They kicked things off with Paul McCartney's Live And Let Die (also a hit for GN'R), before busting into a bombastic version Led Zeppelin's Black Dog - Fergie channeled her inner Robert Plant as if she were practicing in front of a bedroom mirror. A smattering of Sublime's Santeria segued into a flirtatious take on the Stones' Start Me Up.

All in all, they looked like two Peas in a pod, almost maybe not the same one. Check out the video.