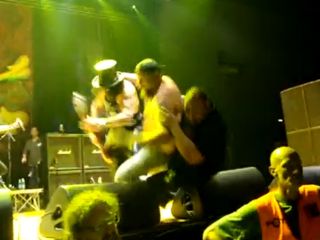 Is it WWE? Nope, it's Slash, who refuses to go down for the count

Slash was attacked on stage during his concert at the PalaSharp Arena in Milan, Italy last night in a manner that was eerily similar to Noel Gallagher's onstage assault two years ago in Canada.

As you can see in the video below, during the solo in Sweet Child O' Mine, an unknown assailant rushed the guitar icon from behind (it starts around the 1:15 mark) and knocked him down onto his monitor. One of the band's security guards was in hot pursuit, however, and tackled the culprit - the two plunged into the pit below.

Miraculously, Slash barely missed a beat, jumping right back up to resume playing (he didn't even lose his top hat!). But after a few bars of soloing, it became clear that some real damage had been done to his Les Paul - Slash handed it to his guitar tech who soon replaced it with a working model.

Proving that It takes more than one bad apple to keep him down, literally and figuratively, Slash later commented on the incident on his Facebook page: "It was a rowdy crowd for sure - but amazing. The guy who nailed me didn't take me down but he busted my poor guitar. Ah well… it was a kick-ass rock show."

Less forgiving was Slash's wife, Perla, who fired off the following Tweet: "The guy came down from the rafters n ran up to slash n grabbed him during his sweet child of mine soLo. Broke the head on the guitar, junior grabbed the asshole n they bth fell to the floor. Junior hit his head hard and the milan security did nothing! Kicked him out but did,t arrest him I love italy! But fuck those security n promoters for doing nothing! Slash could have seriously and junior did. Its not right! What r they there for? As decoration? No they r there to protect the people n the artists. Its not right".

Slash plays the Download Festival tonight. No doubt security will be on high alert.