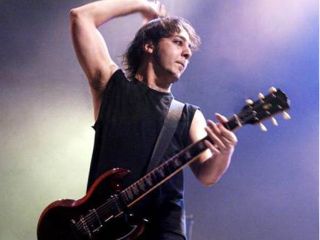 Don't you just hate it when you can't make a cool party? And this sounds like one of the coolest too:

Scars On Broadway, the collaboration between System Of A Down guitarist/vocalist Daron Malakian and drummer John Dolmayan, will launch their self-titled debut with an exclusive concert in the band's hometown of Los Angeles on Monday, July 28, the night before the CD hits stores.

The show will be held in the massive and ornate lobby of downtown's railway terminal, Union Station. To receive one of the limited number of wristbands that gains entry into the performance, fans will pre-purchase the new Scars On Broadway CD beginning at 7:00PM on Monday evening at a special Best Buy tent to be set up at Union Station. The CDs at Union Station will be autographed exclusively for this event by Daron and John.

What's this? You don't live in Los Angeles? Can't make it there? No problem - you can watch it live at http://www.scarsonbroadway.com beginning at 9:25PM PST/12:25AM EST. (For those of you in all points across the globe, you'll just have to do the math.)