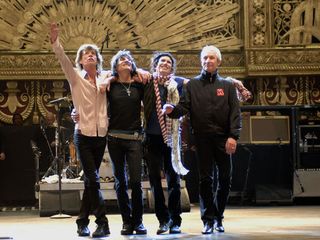 The Stones: up your street?

The Kent town where Rolling Stones Mick Jagger and Keith Richards grew up is to honour its most famous musical sons by naming new streets after Stones songs.

Dartford Council is currently deciding what song titles to give to 13 new streets on the 1,500-home, £400million Bridge estate.

Dartford council leader Jeremy Kite joked: "You can't always get what you want, but in this case I think we can get some satisfaction."

There is already a Mick Jagger Centre for the arts in Dartford. Melbourne in Austrailia has its own AC/DC Lane while there's a Rue De Rory Gallagher in, rather strangely, Paris.

But local police are already warning that die-hard fans could steal the road signs. This has happened in Liverpool's Penny Lane, and the sign of London's Abbey Road is regularly grafitti'd by Beatles fans.