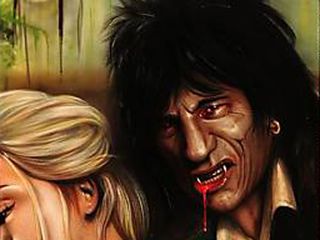 A painting of the Rolling Stones' Ronnie Wood, depicting him as a vampire, is being auctioned on eBay.

Weirdly, the portrait of Wood is by the brother of his currently-estranged wife Jo - the artist Paul Karslake. It was commissioned by FX TV channel to help launch the new series of hit US drama True Blood.

When actor Johnny Depp dined at Richards' one evening, he took inspiration to create his Keef-alike character Jack Sparrow in the Pirates Of The Caribbean movies. Richards still owns the original painting.

Both portraits are pictured below.

Bid here. All money made will be donated to various charities including Give Blood.

Wood himself is a painter. We're not yet sure how he feels about the portrait.