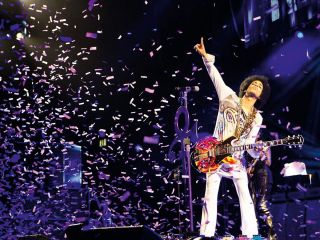 Popular culture was left reeling by the news that incomparable singer and multi-instrumentalist Prince passed away suddenly at his home in Paisley Park, Minnesota, aged 57.

Given the artist's wide-ranging influence, musicians across all genres have paid their respects via social media. We've shared a selection below.

"RIP to @prince…a true artist in every sense of the word. Gone way too soon."
Quincy Jones

"He Changed The World!! A True Visionary. What a loss. I'm Devastated. This is Not A Love Song."
Madonna

"I'm completely shocked and devastated by the sudden loss of our brother, artist and friend, Prince. Thank you to all the fans and supporters for your endless love, and for making such big dreams come true. We offer our love, support, and condolences to our extended family, friends and all fans of our sweet Prince."
Lisa Coleman

"My musical brother... My friend... The one who showed me the possibilities within myself, changed everything, and kept his integrity until the end, is gone. I am heartbroken."
Lenny Kravitz

"I am so saddened to hear of Prince's passing. Prince was a revolutionary artist, a wonderful musician and composer. Prince was an original lyricist and a startling guitar player. His talent was limitless. Prince was one of the most unique and exciting artists of the last 30 years."
Mick Jagger

"I LOVED him, the world LOVED him. Now he's at peace with his Father. Rest in power, @prince, my brother."
Chaka Khan

"This is truly devastating news. The greatest performer I have ever seen. A true genius. Musically way ahead of any of us. Sang with him twice on stage. What an honour. Rest in peace you purple warrior. #Prince #RIP"
Elton John

"I will miss a good friend who was so talented. He was such a great performer / guitar player. Sleep well Prince"
Ronnie Wood

"I'm shocked to hear that Prince passed at such a young age. Musically, he could do it all: sing, play, arrange and produce. Love & Mercy"
Brian Wilson

"I am stunned and heartbroken. I just spoke with him last night. Today, Jada & I mourn with all of you the loss of a beautiful poet, a true inspiration, and one of the most magnificent artists to ever grace this earth."
Will Smith

"Prince was peerless as a musician, performer and songwriter. He was clearly one of the all-time greats, always mesmerizing, magical and cutting edge. He was one-of-a-kind in every respect. To know Prince personally was to know someone kind and gentle, phenomenally brilliant and intellectually curious, with every bone in his body loving music. The world of music has tragically lost one of its greatest defining members."
Clive Davis

"I can't believe it, I'm in total shock. So many wonderful memories, I will miss him. #Prince"
Lionel Richie

"Prince's music is the soundtrack to the soulful and beautiful universe he created, and we have all been privileged to be part of that amazing world. I performed his song Nothing Compares 2 U for the first time a couple months ago. It has a timeless relevance for me and practically everyone I know. Sadly, now his own lyrics in this song could not be more relevant than at this moment, and I sing them now in reverence as I pay tribute to this unequaled artist who has given all of our lives so much inspiration and made the world so much more interesting. We will miss you Prince!!!"
Chris Cornell

"So sad to hear of Prince's passing; one of the greatest musical talents of my lifetime. Maybe of the 20th century. RIP."
Slash

"I, like everyone, was shocked to hear of Prince's passing. His talent and energy was phenomenal, and I use that word literally. He was a phenomenon, elemental, capricious, those words describe him and his music. I remember playing with John at the Roxy in Hollywood, back in the late seventies. Prince came to every performance, and just sat in the back, watching. When I met him about a year later, he gave me a cordial hello. I mention that, because it was so unusual to get response from him. He was a complicated man, who possessed enormous talent. He will be sorely missed. D"
Daryl Hall

"RIP Prince...What a huge loss. What a pure, enormous talent. TALENT. He inspired a generation of musicians to strive for greatness above anything else. His fame was always infused with his talent. And that talent was his freedom, it was his constant reason. That's what an icon is. Only now when you turn around and (sadly) look at his career from his last living day and over the span of his life can you see what he created. It all lines up. It's perfection. Guitar players (and all musicians) everywhere will be picking up a much heavier instrument today."
John Mayer

"Genius, legend, inspiration, friend. The world will miss you. I'll never get over it."
Mariah Carey

"There will be many kings, queens and princesses, but there will never be another Prince."
Pharrell Williams

"And just like that...the world lost a lot of magic. Rest in peace Prince! Thanks for giving us so much..."
Katy Perry

"I'm a man of words I'm kinda speechless on losing #Prince it's like the Earth is missing a note. Little to say-only thing to do is play ...."
Chuck D

"I'm sorry I can not accept that prince has died. I will give the world time to correct its mistake. fuck that."
El-P

"R.I.P. Prince. So sad to see you go. Thank you for all the music. #RIPPrince."
Joe Satriani

"Prince... Watch him perform acoustically and scold the audience with an "uh-uh" for ruining his impeccable groove. He was a master. RIP"
Dweezil Zappa

"R.I.P. to the King Prince, thank you for inspiring me to be a musician first and using this tool to heal people."
Wyclef Jean

"One of the greatest, most gifted and unique musicians, performers and producers ever. #RIPPrince"
Tom Morello

"Deeply saddened by the loss of a amazing artist and great person , was a honor to know him #RIPPrince"
Orianthi

"PRINCE, sad to say, has passed on!!! He was a Giant. My deep condolences go out to his family, friends and fans."
Gene Simmons

"Utterly gutted and devastated by the passing of the Genius that is #Prince. RIP comrade"
Nils Lofgren

"When Eric Clapton was asked how it felt to be the world's best guitarist he replied: "I don't know. Ask Prince". #RIP"
Michelle Branch

"R.I.P. His Purple Majesty. Thank you for everything."
CHVRCHES

"R.I. P. #Prince. An exceptional talent! He made an enormous contribution to music."
Carole King

"I can't believe this"
Zane Lowe

"What do we do now? PRINCE. No. I hope you weren't in much pain...your music saved me time and again."
Duff McKagen

"Prince was one of the rare greats. Saw him loads and each time was a miracle of stagecraft musicianship and charisma. An actual musical hero."
David Arnold

"Today is the worst day ever. Prince R.I.P I am crying!"
Boy George

"Oh man Prince so sad. His music influenced many generations and will continue to."
Linda Perry

"One of my biggest inspirations. A true icon. You will be missed. Sad sad news today... #RIPPrince"
Nick Jonas

"RIP PRINCE..ONE OF THE SADDEST DAYS TO SAY THE LEAST. HE WAS THE TRUE DEFINITION OF A REAL ARTIST.
Nikki Sixx

"Oh no. No no no. Not another! So sad. Rest in peace Prince."
Brad Paisley