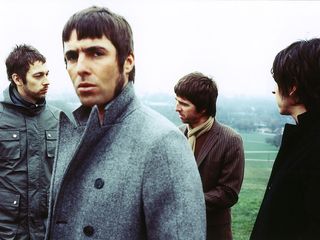 Looks like Noel and Liam Gallagher, Oasis' famous fighting brothers, are at it again. But instead of throwing punches, this time they're tapping on computer keyboards.

It all started the other day, when Noel, on tour with Oasis in South America, wrote in his official MySpace blog, "We speak at bad times for the Oasis tour. Bad times. We are a rudderless ship at the minute. And there's a fuckin' shitstorm on the horizon. I guess all will be revealed in due course."

Continuing, the guitarist wrote, "Strange atmosphere. I wouldn't mind but we're in South America! Playing massive stadiums and there's a bit too much hrmph-ing going on for my liking. Shame really."

He said, he said

If Oasis are having 'bad times' and headed for a 'shitstorm,' it's news to vocalist Liam Gallagher, who responded to his brother's tirade on his Twitter page:

"In Chile," he wrote. "Gem [Archer, guitar], Andy [Bell, bass] Chris [Sharrock, drums] and J [Jay Darlington, keyboards] treated the lads to an impromptu gig in the bar, AMAZING! Don't know what tour you're on RKID..."

Of course, an Oasis that isn't in turmoil is bound to be a boring Oasis. Ironically, when MusicRadar spoke to Noel last year and asked him about his relationship with Liam, he indicated that the two had reached some sort of calm:

"Our relationship is what it is. It isn't bad, it isn't good, it isn't fucked up, it isn't anything. We're just in this band called Oasis, and it's a band we really like being in. End of story."