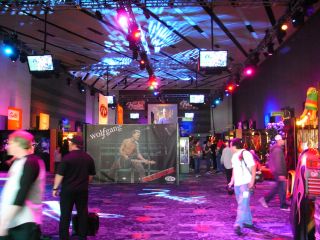 The Fender stand: not so much a stand as a giant room

Fender is the largest, arguably most famous and probably the richest instrument manufacturer in the world, so it's probably unfair that MusicRadar is bestowing its prestigious 'coolest stand' award on the company. Such is Fender's resource that it didn't have a stand as such, but an entire room of the convention centre.

Many will argue that smaller manufacturers wouldn't have been able to afford as large a budget as Fender undoubtedly had, and will suggest we should have taken this into account before deciding on the grand winner. And perhaps they have a point.

But by Bejebus, that Fender stand was cool.

Cool guitars, cool decoration, cool music, cool lighting (although our cameras didn't like it much), more cool guitars… there was even a pickup truck the size of a small elephant loaded with Fender gear!

Allow us to highlight some of our highlights for you with the aid of a few photos from the show:

(Above) The 'stand' itself, crammed wall-to-wall with instruments from Fender's umbrella of brands: Gretsch, EVH, Jackson, Charvel, Guild, Squier, Fender (obviously) and more.

(Above) The Fender Custom Shop section was velvet-roped-off with - rather than a velvet rope - a chain with posts made of a cam shaft and wheel rim off some gargantuan American truck. It's details like this that make all the difference - take note, 'less cool' manufacturers: you'll need a large welding budget.

(Above) Fender kept up the retro American theme with a 50s-style gas pump and a three-piece suite made of old Grease-style car seats. Oh, and a Custom Shop Tele.

(Above) Now onto the guitars. David Gilmour's new signature Strat was very impressive in the flesh…

(Above) …as was Patrick Stump of Fall Out Boy's new Gretsch Stump-o-matic.

(Above) More guitars. There are few companies that can take what is essential a big slab of wood and make it look so cool (Gibson, of course, but Fender does it just as well). This Fender Custom Shop Esquire/Tele-type thing is a fine example of how it's done.

(Above). Fender impressed in the bass department, too. It's Custom Shop again, but we had to show you this Telecaster Bass/P-Bass hybrid. As if theblock inlays and chrome pickup coversweren't cool enough, the bass is topped off with a Tele-type headstock (just out of shot).

So, congratulations to Fender for really pushing the boat out this year, and apologies to every stand that we haven't mentioned. Seriously, we saw cool stuff left, right and centre at this year's NAMM, and it's encouraging to see manufacturers putting in so much effort in presenting their products. Sure, there's financial incentive to do so - but giving that little bit extra makes all the difference.

MusicRadar is looking forward to next year's show already. We'll bring a camera with a better flash…