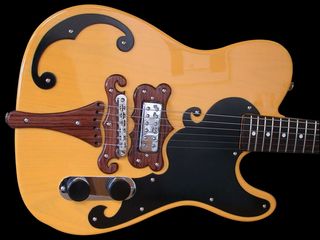 The new specialist guitar from Fret-King

FRANKFURT MUSIKMESSE 2010 PRESS RELEASE: John Hornby Skewes & Co. Ltd., the proprietors and worldwide trade distributor of the Fret-King guitar brand are pleased to announce the introduction of the Country Squire BT "Evocation" to the Fret-King STVDIO range of speciality guitars.

B/T "Evocation"
Quite what influence the original Paul Bigsby guitar that he built for Merle Travis had on Leo Fender is anyone's guess but my feelings are it was quite profound, they were certainly aware of each others "efforts" in the fledgling industry we find ourselves in today.

Les Paul, Leo Fender and Paul Bigsby would hang out together. They were actually drinking buddies and would just "hang out at Les Paul's house."

One day, Travis asked Bigsby to make a special guitar that was solid, but could sustain like a steel guitar and could be easily tuned. Travis sketched out a design. Before you know it we have an instrument with six-on-a-side tuning heads and a solid body, and that was probably the first production solid body electric guitar ( am not including Les Paul's "log" in this as that was a concept proving prototype, not a production instrument).

I personally feel that the head stock was influenced by a much earlier design found on an acoustic guitar built by J Stauffer who, coincidentally, was the guitar builder thatC F Martin was apprenticed to in 1811 AD. Looking at this head stock you can see the Tele® and Strat® influences later popularised by Leo.

Whatever happened, I think the Merle Travis guitar was more a piece of art than just a guitar, embellishments and design ideas from another time, all in all a very cool guitar. How I wish I'd have been a drinking buddy of theirs too!