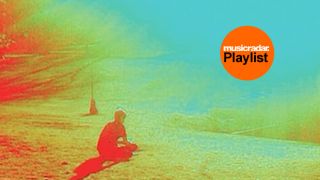 Once again, we collate the collective current musical favourites of the various members of team 'Radar in the latest edition of the MusicRadar Playlist. Enjoy!

Flaming Lips - Look... The Sun Is Rising (Live on Letterman)

The scene-setting first track on the Flaming Lips' new LP is an unsettling affair. As Coyne told us when he talked us through The Terror last week, "Lyrically, I think I'm when I'm singing, 'Look, the sun is rising,' it's about how we can dread it. We want to be lost in that netherworld, like when you're on drugs or something."

Right you are, Wayne - let's all just enjoy this typically, um, theatrical performance on the Letterman show, complete with 'beautiful, beautiful baby'. Will Groves

I love this song for many reasons, not least because it sounds like a hellish version of Rod Stewart's Young Turks. Dark and synthy with a bed of scratching punk guitar, The Hearse also features a lengthy and effective false ending which results in irresistible and frantic head-nodding. The album, Curiosity, arrives 14 May - probably via a different mode of transport. Matthew Parker

The Knife - A Tooth For An Eye (Cooly G remix)

Scandinavian sibling duo The Knife are set to release their long-awaited, sonically bonkers new album Shaking The Habitual next week, and this remix of the lead singe - courtesy of London's queen of synth-rich, hazy club music Cooly G - is taken from the Deluxe Edition. It's an absolutely spot-on, rhythmic reworking; keeping the weirdness of the original intact while adding a brilliant bass-heavy, carnival-style beat into the mix. Si Truss

If Fairport Convention had formed with Tony Iommi rather than Richard Thompson manning the six-string, they might have made a noise akin to Wolf People's heavy spin on UK folk rock. All Returns is the lead single from their new album Fain, which arrives later this month. I'm consistently bowled over by the tone of the guitar solo at 2.00. MP

Mount Kimbie - Made To Stray

Made To Stay is the first track to emerge from UK duo Mount Kimbie's second album, which is due for release in May. Its combination of weirdly funky percussion and lovely synth chords bode well for things to come. ST

The opening track from the Leeds alt-rocker's forthcoming second album, Nature Nurture, due 6 May. It's a bit early to talk about the collection yet, but I've heard it and can tell you that it's less Foo Fighters and more Weezer meets The Pixies. But still quite Foo Fighters. White T-Shirt And Jeans was the track I wanted to shout about, but you're going to have to wait another month or so for that. MP