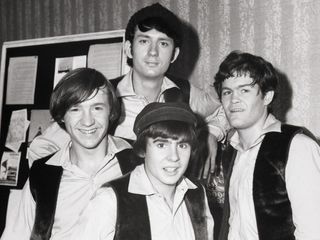 Davy Jones, singer for the '60s TV pop group The Monkees, has died at the age of 66. He passed away today (29 February) at Martin Memorial Hospital in Stuart, Florida. According to the Martin County medical examiner's office, Jones suffered a heart attack.

Born David Thomas Jones in Manchester, England on 30 December 1945, Jones joined Mike Nesmith, Micky Dolenz and Peter Tork in the TV singing group that was patterned after The Beatles - specifically, the comedic antics displayed in A Hard Day's Night. For a brief period in the mid-'60s, The Monkees matched The Fab Four in popularity.

Interestingly, Jones, who began his career as an actor, performed on The Ed Sullivan Show as a member of the Broadway production of Oliver! on 9 February 1964, the night The Beatles made their historic US television debut.

"I watched the Beatles from the side of the stage," Jones said. "I saw the girls going crazy, and I said to myself, This is it, I want a piece of that."

At first, The Monkees didn't play on their recordings (they later fought for, and won, that right), but their string of hits was impressive, including Last Train To Clarksville, I'm A Believer, I Wanna Be Free, Pleasant Valley Sunday and Daydream Believer.

When not before the cameras, the group toured, and in 1967 their opening act was none other than Jimi Hendrix. Predictably, the pre-teen audience for The Monkees gave the now-legendary guitar god a cool reception. As Micky Dolenz recalled, "Jimi would amble out onto the stage, fire up the amps and break out into Purple Haze, and the kids in the audience would instantly drown him out with 'We want Daaavy!' God, was it embarrassing."

When The Monkees' TV show ended, the band starred in the experimental film Head (co-written by Jack Nicholson) before going their separate ways. Jones issued solo recordings and resumed acting, but in the '80s, fueled by '60s nostalgia, The Monkees regrouped (occasionally with Nesmith) for a series of successful tours. Jones also performed as a solo act - his last date was 19 February in Oklahoma.

Jones is survived by his wife, Jessica, and four daughters from previous relationships.