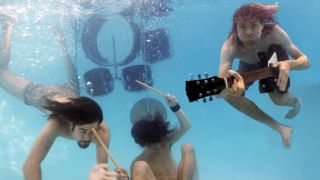 This article was originally published in Professional Photography, the inspiring new magazine for photography professionals.

When Kirk Weddle was asked to photograph a baby underwater for an album cover in 1991, the commission was unusual but not particularly remarkable.

It was a low-budget shoot and the name of the band meant nothing to him. "I'd shot a lot of band pictures before, and nobody I'd photographed ever went anywhere," he says. "So I wasn't expecting much out of these guys."

However, the band was Nirvana and the album was Nevermind. It went on to become massive hit, to date selling more than 24 million copies, while its cover became one of the most iconic in rock history.

At the time, Weddle was 29 and at the beginning of a new career as a photographer. In his teens he had been injured while serving in the US military and had afterwards taken a degree in photography.

He was mostly working as an assistant, but had trained in underwater work and at the time was one of the few commercial underwater photographers in Los Angeles.

Meanwhile, Geffen Records' art department was looking for an image for the cover of Nirvana's second album. The band was not widely known and its first album, Bleach, had failed to chart in the US.

The story goes that frontman Kurt Cobain and drummer Dave Grohl had watched a film on underwater births and wanted the cover to show an image of a baby underwater.

After searching unsuccessfully for a stock shot, Geffen contacted Weddle and asked if he had a picture. He didn't. A month went by, and then the company contacted him again and commissioned him to take the cover shot.

As luck would have it, Weddle's friends Rick and Renee Elden had a four-month old baby boy named Spencer. "I said, 'Can we use your kid?' and they said 'Sure,'" Weddle continues. "They didn't think it was a big deal because they knew I was good in the water."

On the day of the shoot, only the photographer, the baby and the baby's parents were present. Weddle set up his Nikon in an underwater housing on a tripod at the bottom of the pool. He first shot a clip test using a child's doll to make sure he had the correct exposure.

He blew a little air into the baby's face to induce a gag reflex and make him temporarily hold his breath. Then, with Rick and Renee on either side, the baby was eased into the pool.

"He just drifted by, happy as could be," Weddle remembers. "I shot off about five or six frames, we pulled him out and he was fine. We did it again, bang bang bang, then he started crying and I said, 'Okay, we're done.'" The shoot took just five minutes to complete and half a roll of film was used.

The story of Nirvana's Nevermind

When the film was developed, Weddle saw he had only one good frame. However, there was a problem with it: the baby's penis was prominently shown. "I was like, damn, you know, I don't know whether they're going to like that," he says.

"So I went and shot some other babies from the side as a back-up, but they still wanted the original shot." The dollar bill on a fish-hook was added at the post-production stage and it seemed that Weddle's work was done.

But not quite. Sales of Nevermind gathered momentum and within a few months it was at the top of the Billboard charts. As part of the album's publicity drive, Weddle was commissioned to do a second shoot, this time showing the band members underwater with guitars and drums.

Weddle remembers it as being a difficult shoot. The band was exhausted after a very late night and the shoot took place early in the morning. Cobain spend long periods asleep by the side of the pool. Nevertheless, the resulting images gave the impression that the band was having fun while fooling around. Job done.

Weddle has gone on to have a successful career as a commercial and editorial portrait photographer for clients including Coca-Cola, Newsweek and Rolling Stone. However, he says the album's phenomenal success has been both a blessing and a curse for both him and Spencer Elden.

"When I did it, I was worried that he would hate me when he grew up," he says. "He didn't, but I think it's been tough for him to live with. For me, it's pretty hard to top that picture, but I don't want to be a one-hit wonder so I'm always looking for my next one.

"I completely walked away from it for a while, but now I embrace it. Over the years, I've gotten all kinds of different reactions. Ten years ago, people were like, 'Oh that's so old, we don't care about that.' Now, people think it's pretty cool."

See more of Kirk's work at www.kirkweddle.com. His Nevermind images are available as signed limited-edition prints from http://www.modernrocksgallery.com/

This article was originally published in Professional Photography, the inspiring new magazine for photography professionals. To buy issues or subscribe, visit www.myfavouritemagazines.co.uk.