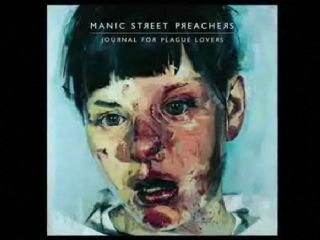 Journal For Plague Lovers' artwork is by Jenny Saville, whose work also graced the cover of The Holy Bible

Manic Street Preachers' self-confessed "follow-up to The Holy Bible" (the album, not the big book) is finished, packaged and ready to roll on 18 May. Journal For Plague Lovers apparently contains lyrics left over by "presumed dead" guitarist Richey Edwards.

One look at the Steve Albini-produced album tracklisting is enough to make us believe it:

There's no Ifwhiteamericatoldthetruthforonedayit'sworldwouldfallapart (à la Holy Bible), but while some read like bad anagrams, some (hello, Jackie Collins Existential Question Time) are bordering on genius. We'll let the band explain the rest…

"All 13 songs on the new record feature lyrics left to us by Richey. The brilliance and intelligence of the lyrics dictated that we had to finally use them."

"The use of language is stunning and topics include The Grande Odalisque by Ingres, Marlon Brando, Giant Haystacks, celebrity, consumerism and dysmorphia, all reiterating the genius and intellect of Richard James Edwards."

As well as a handful of festival dates this summer, the Manics are setting out on a modest tour of the UK and Ireland in May. They're playing Journal For Plague Lovers in its entirety so for fans of Richey era MSP (and the late Giant Haystacks) - it's a must attend.