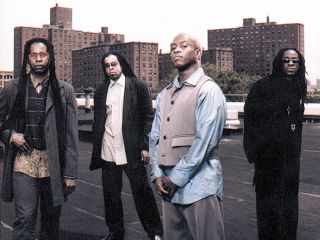 Living Colour are back

Living Colour return in September with an album called The Chair In The Doorway, the band's first set of new material in nearly six years.

Due 15 September on Megaforce Records, the 11-song album was recorded in numerous locations over the last few years, with a majority of the sessions taking place at Sono Studios outside of Prague in the Czech Republic.

Lead singer Corey Glover tells Billboard that most of the songs came together after the band was asked to re-record Cult Of Personality for Guitar Hero III: Legends of Rock.

Glover has recently been playing the role of Judas in the musical Jesus Christ Superstar.

"We recorded everywhere. We even recorded during shows - ideas that came up during shows turned into songs," says Glover. "A lot of that turned onto [bassist] Doug [Wimbish]. Doug made up a lot of grooves; we took a lot of grooves we had from soundchecks and gigs - and he sort of codified and made a library of that stuff."

Over the years, guitarist Vernon Reid has worked with Mick Jagger, Tracy Chapman, and recently K'Naan. Drummer Will Calhoun has played on albums by Mos Def, Kaki King, Herb Alpert, and Wayne Shorter along with his own jazz-flavoured releases.

Full tracklist for The Chair In The Doorway is: