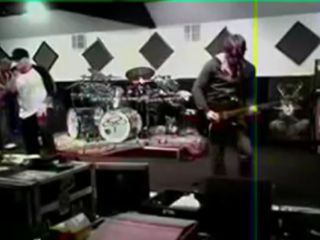 As the whole world knows by now, Limp Bizkit have buried all hatchets and have reformed for a world tour - and possibly an album if all works out.

Things working out depends mostly on guitarist Wes Borland, the famous 'he's in, he's out, he's in' bandmate whose clashes with rapper Fred Durst have been a source of constant friction.

When the group announced their reunion last month, Durst and Borland issued a statement of unity, saying, "We decided we were more disgusted and bored with the state of heavy popular music than we were with each other.

"Regardless of where our separate paths have taken us, we recognize there is a powerful and unique energy with this particular group of people we have not found anywhere else. This is why LIMP BIZKIT is back."

Check out the video

So let's see what these guys are up to. Here's newly released rehearsal footage of the band running down two songs.The first is Boiler.

And here they are reacquainting themselves with My Way.

Borland seems to be in good form, having fun with his echo unit and making cool spacey sounds.

So what do you think? Are you still 'down wit da Bizkit?'