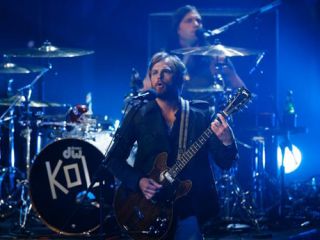 Kings Of Leon treated a sold-out crowd at London's Hyde Park last night to a four-song teaser from its upcoming, untitled album.

With support coming from The Drums and The Black Keys, the Nashville-based rockers headlined the 60,000 capacity event. The working titles of their new songs included Mary (a stunner, we say, see video below), Southbound, Immortal and Radioactive.

"Since we saw you guys last we went and made a record," frontman Caleb Followill told the crowd. "That's what we put a lot of work into. Just yesterday some people at the record label got to hear a couple of songs from it. I don't know if they want us to play a bunch of new song, but I think 'fuck it' - were gonna do it!"

The group also played a cover of the Pixies' Where Is My Mind?, which some members of the audience took to be another of KOL's new songs.

"It's been one of the greatest experiences of my life," Followill told the crowd. "Thank you all very much. One of these days, when we're all fat and bald...or balder, and we're sitting in Tennessee telling all our kids about all the great things that happened to us, this is gonna be one of those."