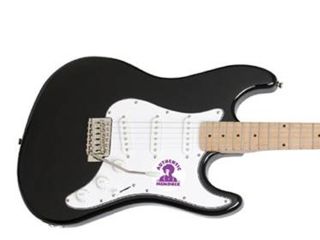 Specifically chosen for its innovation, quality and global impact, Authentic Hendrix LLC began conversations with the Gibson Guitar Corp. in 2008 to develop guitar packages that would serve as a tribute to the musician who many have called the world's greatest guitarist of all time. The effort is also part of preserving his legacy so that generations to come could develop and appreciate his techniques and musicianship. Each guitar will have the Jimi Hendrix signature and logo on it and will come with special added value components only offered with the specific package.

The Jimi Hendrix "Experience" Electric Guitar Package is the ultimate tribute to the greatest guitarist who ever lived. The company has combed over historical details and taken the best from more than 100 years of guitar making so that every guitarist - from the beginner to the seasoned player - can find his or her inner Hendrix with this package. The "Experience" package will come with an official "Jimi Hendrix signature electric guitar" and all the necessary accessories and some fun extras including a Jimi Hendrix Signature "Voodoo Child" amplifier, a Foxey Fuzz pedal, a deluxe padded gig bag, an instructional DVD, an electronic tuner, two guitar cables, a Hendrix inspired strap, three picks and a USB drive containing exclusive Hendrix media content. In addition consumers will receive a Hendrix inspired tie-dyed tee-shirt and bandana. True to its name, this guitar package will give the music enthusiast the ultimate Hendrix experience. MSRP $449.99 USD.

Jimi Hendrix "Signature" Electric Guitar Package: It's been almost 40 years since Jimi Hendrix's death but he has continued to assert his tremendous legacy with the six strings of his guitar. In recordings and film footage, his mesmerizing showmanship lives on. In a fitting tribute to the man who famously played right-handed guitars upside down, Gibson and Authentic Hendrix have announced the Jimi Hendrix Signature Electric Guitar Package.

Designed in close collaboration with Janie Hendrix and Gibson engineers. The package inherited the best features from Jimi's original equipment so that Hendrix fans the world over can enjoy a deluxe guitar package the way Jimi would have liked it. This package comes with a "Jimi Hendrix signature electric guitar and all the necessary accessories, a Jimi Hendrix Voodoo Child amplifier, a deluxe padded gig bag, an instructional DVD, an electronic tuner, a guitar cable, a Hendrix inspired strap, three picks and a USB drive. MSRP $332.99 USD.

The third offering from this exclusive partnership is the Jimi by Jimi Hendrix "Little Wing" Electric Guitar Package which Gibson engineers and Authentic Hendrix LLC designed with one question in mind: "What if the world's greatest guitarist was still alive today, what guitar would he want to play?" Combining the historical authenticity and more than 100 years of precision guitar making the launch of the Jimi "Little Wing" electric guitar package has been launched.

This "Jimi" guitar package is equipped with three Voodoo Child Inspired by Jimi Hendrix pickups and comes with the new 10-watt "Max Feedback" amplifier so that the musician is all set to recreate Hendrix's unearthly playing style. The package also comes with an instructional DVD, which includes detailed lessons and a walk through of the components of the entire guitar package. In addition consumers will receive a deluxe padded gig bag, a 10 foot guitar cable, a nylong strap with the Authentic Hendrix logo on it and three Authentic Hendrix guitar picks. MSRP $249.99 USD.

"Creating this new guitar is continuing Jimi's practice of giving back to people. He would go to Manny's Music store in New York to make himself available to young musicians and invite them to his studio to watch him record. He also gave away guitars or bought them for young players," said Janie Hendrix, Jimi's sister and CEO of Authentic Hendrix.

"It was our own idea to approach Gibson in the beginning after the positive experiences we'd had with the Flying V's that they made based on Jimi's guitar some years back. Our excitement inspired their excitement, and here we are, creating these new branded musical instruments. This is just the tip of the iceberg."

Liked this? Now read: The best electric guitars under £300, 12 best amps for heavy metal and The top 10 stompboxes we can't live without