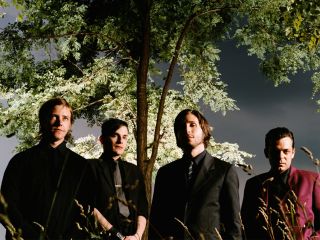 Fresh from various side-projects (drummer Sam Fogarino's Magnetic Morning and bassist Carlos Dengler's film-making career) Interpol are back in the studio working on the follow-up to 2007's Our Love To Admire.

The NYC-band have 'checked-in' from the studio with an update. In a nutshell, they've 'no intentions' and 'no concept' but the songs do "sound vital" at this stage. Here's the full report…

After the touring for OLTA came to an end, we all dispersed to tend to our individual personal lives.
...And to get our ducks in a row.

Now the band has reconvened, and we are rehearsing new songs.

We find ourselves marveling at the tremendous focus
that has defined our early rehearsals for this, our 4th effort.

All kidding aside, we feel like a new band.

Once again, we have no concept to this batch of song-writing.
(We are often asked about our intentions when we set out to write music.)
There is rarely any intention to this process.
We just make the music.

And without going into too much detail, the songs sound vital.

It's as though we've hit upon a balance between our urgency and
our calm. And true to our better work, this is music that unravels over time.

We anticipate that, once it's done, you high-minded folks will welcome the music...
into your bedrooms...to swagger and breathe...

It's still early, yet, though. We will keep you posted.

In the meantime, a couple of us have kept ourselves busy with extra-curricular activities. Carlos has made a film called My Friends Told Me About You and Sam has released a record with his band Magnetic Morning.

And we hope that you're all weathering well the turmoil of the age.