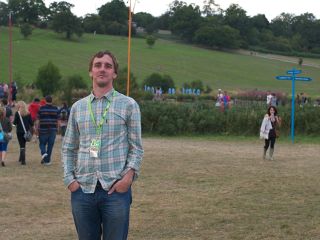 Ever wondered how a festival line-up is put together? Us too! In the first part of an exclusive series, MusicRadar speaks to the curators, directors and bookers from three top UK music festivals to find out, as well as asking them how your band can get on their bill in 2012!

Playing your first ever festival gig is one of the most exciting experiences in a new band's budding career. Yes, you'll probably be playing a stage no bigger than your living room. Yes, you'll have no chance of getting a rider. And yes, your set will be over as soon as you've plugged in, but you will have your collective feet on a ladder that - if you're good enough - will lead you to bigger stages and bigger fees over the years.

Whether you're a dance, electronic or urban pop act; a hardcore, indie or rock band, or something so leftfield and off the wall that you defy classification, between Latitude, Reading and Leeds and Wireless, there's room for everyone.

In this three-part series, MusicRadar speaks to the bookers for each festival to discover how a mammoth festival line-up is crafted, how you can get your band on a bill, and why developing a thick skin is essential when slugging it out with tons of other potential festival newbies.

A promoter since he was a wee lad of 17, Latitude music curator Jon Dunn has always had a penchant for off the wall bands. Curating music for Latitude since the very first festival in 2006, Jon is looking forward to this year's line-up, which mixes a neat blend of mainstream and leftfield acts such as Paolo Nutini, My Morning Jacket and Edwyn Collins.

Ever the busy multi-tasker, Jon also books bands for The Big Chill, but here he gives us insight into putting together one of the most eclectic festival line-ups of the summer.

As curator of Latitude festival, how many stages do you book acts for?

"I book the three main stages, which is the main outdoor stage, the second stage, which is an 8000 capacity tent, and then the third stage in the woods, which holds about 1500-2000 people. On top of that, there is a fourth stage that [BBC Radio 1 DJ] Huw Stephens curates, and I book the acts for him too."

How did you get such an enviable job curating for Latitude?

"After promoting bands in smaller venues around the country since I was 17, I later moved to London to join Live Nation. The first acts I picked up (and still promote) are bands like Arcade Fire and Antony And The Johnsons [who later went on to win the prestigious Mercury Music Prize for Best Album in 2005].

"The stuff I was doing was kind of leftfield in a corporate company, and at the time it felt as though there wasn't a place for some of these acts. A lot of the bands being booked were big pop and rock acts. I got to know Melvin Benn, who runs Festival Republic [shared by Live Nation], and Melvin's idea was to put together a leftfield festival, combining art and music acts at one event.

"The idea was to have quite challenging acts, but acts who we thought deserved to have some focus on them. The fact that I had already been looking after Arcade Fire and Antony, and the fact that Festival Republic and Live Nation were linked, meant I got the job because I shared the same vision as Melvin.

"Antony headlined our first year, actually. We had about 10,000 people, and now we've evolved from a niche festival to opening it up to a bigger audience of about 35,000. There are acts on Latitude who could be termed as more mainstream, but there are still lots of underground and left-field acts who represent the heart and soul of Latitude."

How far in advance of this year's Latitude festival did you begin work on the line-up?

"Around September last year, and that was quite late, actually. I'm looking at next year already. I begin by pin pointing one or two acts that I really want on the main stage, then when the headliners are sorted I move on from there. Right now I'm looking at headliners for next year, so that's 12 months in advance."

Do you personally research all the bands who play Latitude, or do you have a team of festival scouts who help you craft a potential line-up?

"I buy all the new album and single releases each week, and I read everything [magazines, newspapers, online reviews]. I used to get a lot of free stuff from record labels, in terms of new releases, but not so much anymore so I go out and buy them every Monday. There can be five, six albums a week, and I try to stay on top of new releases.

"However there are bands where, even though I don't like them, they're going down a storm and would be a good fit for Latitude. Overall, I'm looking at all three factors and who who would be great on the bill. I also look at the mix of acts as well, making sure that we're not going so leftfield that we're up our own arse, or that we're going too mainstream either."

After listening to new releases and thinking about acts you'd love to play Latitude, where do you go from there? Do you come up with a short list of favourites and start working through it?

"Yeah, that's damn right actually. For this year's line-up, I had a pad about 10 pages long with potential acts. It was fun! Sometimes, you can look at bands one month, and then a couple of months later they're in a completely different place. Things can change so quickly in music.

"The list really started to formulate when the top three acts on the main stage were sorted in January, and from there I started putting out offers on all the bands for the other stages."

How long does it take from putting in offers to securing a final line-up?

"Probably around five months, and part of the reason for that is because you put each act into the line-up one at a time. You put in the first band on the main stage on the Friday, then the Saturday, then the Sunday, then you go back and put the second band on each stage - it's like a big jigsaw puzzle where you slot bands in on each day.

"It takes a while because you're asking a certain band to play a certain slot on a certain day, but of course sometimes they can't play that day or slot but can play another, so your jigsaw moves around.

"These bookings go through the booking agent, then through manager, then through the band, and then they come back around to me, and it starts all over again from there until you've confirmed finally the act. It's a long process. What you think should be a really quick conversation, can take a week or longer. It gets quicker the further into your jigsaw though, because you have less bands to ask to play."

What criteria do you factor in when piecing together your jigsaw? For example, do poor album sales impact on getting bands on the Latitude bill, even if you really like the band?

"This is a difficult one because some acts just don't sell albums, yet they're huge. I used to promote a band called Gogol Bordello, who only sell about 5000 albums but they can play two Brixton dates in London, which is about 10,000 people. So it's quite skewed.

"Poor album sales won't affect an act getting on the bill if we like them, but it will affect where they sit on the bill. If an act sells 500,000 copies of their album, there's no doubt there will be a ground swell of people who will want to see them."

For a new band who want to play Latitude next year, would they have to be at a certain level of popularity to get on the bill?

"We pretty much consider everything, but there are problems surrounding this. It's a frustrating issue, but there would be no chance of me listening to every single act who wants to play the festival. There is a viewpoint - certainly from myself - that we want to have acts on the bill that maybe haven't broken through, but we like them and they are having great reviews. They don't have to be new bands either.

"The other side to that is if you put too many less established bands on the bill, you won't sell as many tickets. The Huw Stephens stage is very much geared towards less established bands, with BBC Introducing putting forward local bands from the Suffolk area [where Latitude takes place], and Huw has a lot of unsigned acts as well.

"It is difficult and I am sympathetic to the amount of good bands who want to get onto festival bills but they can't. The flip side is that there are bands who can't get on to the festival circuit because they're simply not good enough. So yes, we do want to take on less established bands, or those who haven't broken through yet, but they have to be good."

Are there any kind of bands or genres that wouldn't work for Latitude?

"Well there aren't any rock or metal bands - it's just not that kind of festival - but sometimes, the more eccentric the band, the more chance they have of getting on the bill. Other than rock and metal, we'll look at anything."

What are your top tips for a band looking to land a festival gig?

"You have to be good! A booking agent can help, because I may be speaking to that agent about some of his or her bigger acts anyway, so research some agents who have an eclectic number of acts and try to sign up with them.

"I would probably give a band more time if their agent approached me, because there's really quite a small circle of agents and I know most of them. However, having a booking agent isn't imperative. [There is also a specific email address for bands who want to play Latitude]

"The one thing that puts me off is a really long email with loads of attachments and pictures. That's nice, but the reality is there aren't a lot of festival bookers in the country who have the time to wade through that. It's different for every booker, but for me it's a case of: keep it short, keep it simple, and let's hear the tunes. No long biographies!"

Finally, who would headline your dream Latitude festival?

"The Doors. It changes every day, but today it's The Doors."