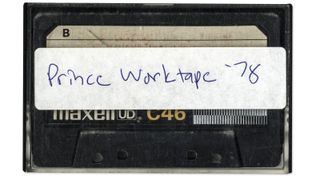 A number of items formerly owned by Prince go under the virtual hammer in an online auction this week, including a 1959 Gibson acoustic that the purple one used to compose and demo in the '70s.

The L-Series acoustic guitar crops up in photos from the period, and has a starting price of $60,000. 5% of what promises to be a hefty final sum will go to a worthy cause, the Our House LA's Camp Erin for Grieving Children.

Amongst a veritable stack of other items, including numerous stage outfits and an engagement ring plus hand-written proposal note Prince gave to former wife Mayte Garcia (valued at a romantic $100,000+), is the real jewel in the crown, a demo cassette offered by one-time collaborator and guitarist Dez Dickerson.

Side B of "Prince Worktape '78" boasts six working versions of songs, including three previously unheard tracks, plus early versions of So Blue, Gotta Broken Heart Again and Sometimes It Snows In April. It's all yours for a minimum of $20,000.

For full details of all the items on sale head over to the auctioneer Nate D. Sanders' site.