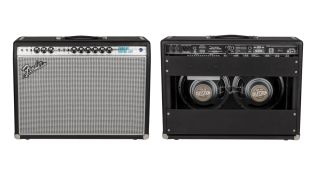 Autumn 2013 saw Fender debut its '68 Custom amplifier range within the company's popular Vintage Modified Series. Late 1960s 'Silverface' cosmetics were back, but with a few twists; the '68 Custom Deluxe Reverb, Princeton Reverb and Twin Reverb all featured upgrades designed to make them more practical for real-world players than a strict reissue or vintage piece.

Sitting between the Deluxe and Twin in the power rating and headroom stakes, the '68 Custom Vibrolux Reverb features a pair of 10-inch Celestion Ten 30 speakers, 35-watts of power courtesy of two 6L6 output valves and the same gorgeous tremolo and reverb circuits that feature on its siblings.

If you need a little more clean headroom than the Deluxe Reverb offers or are playing bigger club stages, the '68 Custom Vibrolux Reverb looks like a solid choice, with UK street prices are expected to be around £1100. We haven't got our hands on one yet, but for an example of what the '68 Custom spec brings to the party, check out our video comparison of a '68 Custom Deluxe Reverb with its Blackface equivalent.