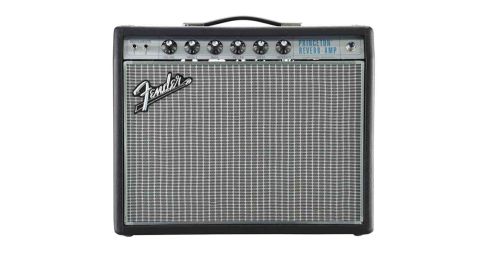 A studio essential that might just cater for your live needs, too.

The Princeton features a silver and turquoise front panel, with narrow vertical black lines separating the control groups - a detail that was swiftly phased out after early production runs - along with a 'drip edge' aluminium grille cloth trim (abandoned in mid-1969) and period-correct 'tailed' Fender logo badge, which was dispensed with in 1973.

This involves the use of additional analogue components on a sub-PCB within the chassis, that do the job of the lamp/ photocell arrangement found inside US versions of the amplifiers. Purists may justifiably be offended, but let's not all rush out to blockade the Channel Tunnel in protest against European Union bureaucracy.

Despite online grumbles about the possibility of this introducing unwanted noise into the circuit or just generally being A Bad Thing, it hasn't provided us with any sonic cause for concern during our time with any of the '68 Customs we've had on test, and the tremolo sounds are nothing short of lush.

Fender used a variety of different speaker brands throughout the 'silverface' era, such as Oxford, JBL and Utah, but never Celestions, so it's interesting that the company should opt to 'go British' - albeit via China - with a single Celestion Ten 30.

Plugging into the little Princeton, we're immediately reminded how loud and soulful a small 6V6-powered combo can sound, and also exactly why so many classic guitar tracks have been cut with these amps over the years.

While you don't have to turn the volume control much past four before a guitar with PAF- style medium-output humbuckers, or even a hot Tele, starts to elicit some tasty raunch when played hard.

Believe us when we say that despite its 12-watt power rating and single 10-inch speaker, this amp could be all you need for gigging in these volume-limited times, as long as massive clean headroom isn't a deal-breaker and your drummer isn't an animal.

There's certainly more drive and compression here than you'd get from a vintage 'silverface' Princeton, thanks to the circuit modifications, while the Celestion tightens up the bottom-end, making for a less muddy bass response than that of the Jensen C10R-loaded 'blackface' '65 reissue.

Regardless of the internal shenanigans required to make the amps legal on this side of the pond, the tremolo provides a warm, suitably retro throb, and the reverb is deliciously musical; with a good microphone in front of it, this compact amplifier sounds huge. Every studio should have one, and if twangy vintage grit is your thing, so should you.

While the list price finds the amp sailing dangerously close to waters occupied by serious boutique competition, both online and on the street it's a happier tale, with the Princeton readily available for around £750 at the time of writing.

Master volumes? Effects loops? When the playing experience is this musical and immersive, who needs 'em?