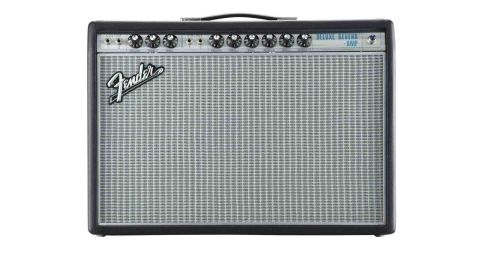 The definitive 'amp for all occasions' just got even more versatile.

The '68 Custom Series from Fender aims to combine the spirit of the early 'silverface' era amps with a few contemporary tweaks, rather than providing exacting recreations of the original models. Here we're looking at the Deluxe Reverb.

Among the most immediately noticeable features of the '68 Custom Deluxe Reverb is the silver and turquoise front panel, with narrow vertical black lines separating the control groups - a detail that was swiftly phased out after early production runs - along with a 'drip edge' aluminium grille cloth trim (abandoned in mid-1969) and period-correct 'tailed' Fender logo badge, which was dispensed with in 1973.

Where original Deluxe Reverbs of the period would have had a Normal channel, sans tremolo or reverb, the new '68s have a Custom channel with access to those global effects and a new voicing, courtesy of a "modified Bassman tone stack" that's billed as being more pedal-friendly. Where you would have found a Vibrato channel, there's now a 'Vintage' channel with a more traditional voicing.

This involves the use of additional analogue components on a sub-PCB within the chassis, that do the job of the lamp/ photocell arrangement found inside US versions of the amplifiers. Purists may justifiably be offended, but let's not all rush out to blockade the Channel Tunnel in protest against European Union bureaucracy.

Despite online grumbles about the possibility of this introducing unwanted noise into the circuit or just generally being A Bad Thing, it hasn't provided us with any sonic cause for concern during our time with any of the '68 Customs we've had on test, and the tremolo sounds are nothing short of lush.

Fender used a variety of different speaker brands throughout the 'silverface' era, such as Oxford, JBL and Utah, but never Celestions, so it's interesting that the company should opt to 'go British' - albeit via China - with a single Celestion G12V-70 in the Deluxe.

It's time to find out what all these modifications mean for the player...

One of the all-time classic gigging and recording amps, in this new incarnation the Deluxe Reverb is arguably more practical than ever, thanks to the extra versatility offered by being able to utilise the tremolo and reverb on both channels.

It negates the temptation to snip the bright cap on the Vibrato channel, as so many have on both the reissue and vintage models over the years in order to get the amp to play ball with overdrive pedals.

Compared to the '65 reissue's Vibrato channel, the '68 model here has a little less brightness and headroom on the Vintage side, but there's still a magic sweet spot between 4.5 and 6 on the volume control (depending on your choice of guitar), where the amp delivers a wonderful, dynamic dirty-clean rhythm sound at stage level that works as a brilliant core guitar sound for all manner of rock 'n' roll, Americana, blues and classic pop applications. Just add picking-hand dynamics and your guitar's volume control; there's so much range here.

The Custom channel has considerably more grit than a vintage Deluxe Reverb's Normal channel, and some Tweed-like character, too. Fully maxed - if your ears/spouse/neighbour/sound engineer permit - there's a real, grin- inducing Neil Young vibe: it's flabby, compressed and ugly in a thoroughly pleasing way.

The onboard reverb and tremolo are wonderful, classic-sounding musical tools that push and inspire you to play in a certain way. Far more than a means of merely amplifying your guitar sound, this is a musical instrument in itself.