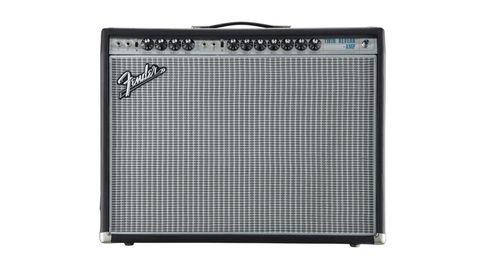 Massive sounds, but the power may just be too much for today's player.

The new '68 Custom Series sees Fender head back to its early 'silverface' amps and add a few modern twists to the Twin Reverb, Deluxe Reverb and Princeton Reverb. Here we take a look at the largest combo of the trio, the Twin Reverb.

The Twin's silver and turquoise front panel proves striking, with narrow vertical black lines separating the control groups - a detail that was swiftly phased out after early production runs - along with a 'drip edge' aluminium grille cloth trim (abandoned in mid-1969) and period-correct 'tailed' Fender logo badge, which was dispensed with in 1973. It's a smart-looking amplifiers indeed.

Where original Twins of the period would have had a Normal channel, sans tremolo or reverb, the new '68s have a Custom channel with access to those global effects and a new voicing, courtesy of a "modified Bassman tone stack" that's billed as being more pedal- friendly. Where you would have found a Vibrato channel, there's now a 'Vintage' channel with a more traditional voicing.

This involves the use of additional analogue components on a sub-PCB within the chassis, that do the job of the lamp/ photocell arrangement found inside US versions of the amplifiers. Purists may justifiably be offended, but let's not all rush out to blockade the Channel Tunnel in protest against European Union bureaucracy - it hasn't provided us with any sonic cause for concern during our time with any of the '68 Customs we've had on test, and the tremolo sounds are nothing short of lush.

Fender used a variety of different speaker brands throughout the 'silverface' era, such as Oxford, JBL and Utah, but never Celestions, so it's interesting that the company should opt to 'go British' - albeit via China - with a pair of Celestion G12V-70s.

On powering up and igniting that turquoise jewel power indicator - another departure from vintage spec, as the originals were red - we're greeted with a level of hum that says, "Yes, I'm a valve amp and you've switched me on" rather than boding ill; it's certainly not intrusive.

Compressed and flabby certainly aren't adjectives that most players would apply to a vintage Twin Reverb, and the '68 Custom does little to dent the Twin's reputation as a simply colossal-sounding amplifier.

Thanks to a solid-state rectifier, a pair of 12-inch drivers and a quartet of 6L6s, there's headroom to spare and a piano-like bass response, along with a three-dimensional high-end. You can drive this thing by cranking it up, of course, but in 2014 we can't think of a live venue that will let you get away with it!

Many players will find the Twin too impractical for everyday use, but if you get all of your drive tones from pedals and crave headroom, or if you are a post-rock player looking for arctic sheets of clean tone on which to build heavily effected soundscapes, then it's an excellent choice.

While the list price finds it sailing dangerously close to waters occupied by serious boutique competition, both online and on the street it's a happier tale, with the Twin available for £1,130 from major retailers at the time of writing.