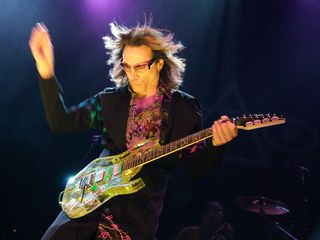 Steve Vai will release Where The Wild Things Are on 29 September (5 October in the UK). A grand, double-DVD set containing a two-hour-and-40-minute concert filmed last year at the State Theatre in Minneapolis, Minnesota, it is, in Vai's words, "a shining highlight of my career."

The DVD, captured in HD and containing both 5.1 and stereo mixes (it'll be available on Blu-ray), showcases classic Vai material and some new selections.

Before leaving for a 10-day vacation in Tahiti, Steve Vai sat down with MusicRadar to discuss the making of Where The Wild Things Are and how he came to form his backing band.

First off, I have to ask about the title. As you know, it's the title of a well-known Maurice Sendak's children's book, and an upcoming film adaptation by director Spike Jonze.

"Yeah, the title's kind of a tricky thing. I knew about the book, of course, and actually, that's where I got it from - I love the title and thought it would be great for an album. To me, it was both very mature and childlike.

"When I was actually filming the DVD, however, I was calling it Paint Me Your Face, but then I decided on Where The Wild Things Are. It's so ironic that now a major film is going to be coming out with the same title. I don't want people to think that I'm trying to link my DVD to the film in any way."

Did you think about changing it?

"Well, I did, but it ended up being too late. Sleeves were printed, it was out there on the internet - I had to leave it be. As it stands, it's a great title and my DVD has nothing to do with the movie."

There are some interesting tidbits of information in the DVD's trailer. It says you're considered "the greatest guitar virtuoso of our time." So are you saying you're better than everybody else?

[laughs] "No, no, no. Not in the least. That's just the film editor doing his job. A little exaggeration never hurts, right?"

For a second, I thought you were saying you were better than your former teacher, Joe Satriani.

Next: Making the band

Speaking of Satriani, I was wondering if you were getting a friendly little dig in on him. In the trailer it says you were nominated for 13 Grammy Awards and you won three times. Joe, on the other hand, has been nominated 15 times and never won.

[laughs] "Wow, that's odd. I never thought about that. No, I wasn't having fun with Joe. If anything, I was having a go at that polka player…what's his name?…he's always nominated and he always wins. [Editor's note: Jimmy Sturr] I guess he doesn't have a lot of competition. Unfortunately, being a rock instrumentalist, I have a bit more competition than the polka guy."

Let's talk about the actual tour from which the DVD was filmed. Now, you had just come off a very major tour with an orchestra, the Sound Theories tour...

"I got Bryan Beller on bass - he's an absolute monster - so that felt good to me. When it came down to violin players, though, I got a little scared. The people I was seeing were either these shredding metal players with no grace, or else they were strict classical players, who were…well, they were a little wimpy."

So you needed people who could play with finesse but still rock out.

"Exactly! And then I found Alex DePue, and he just blew me away, so he was in. Then, out of the blue, I started getting these e-mails from this girl in the Midwest…Ann Marie Calhoun. She had everything…finesse, grace, but the ability to really rock out and play with fire.

"That's the funny thing about trying to find elite players - sometimes they just don't rock out. These people, this group, they rock out, but boy, they have incredible musical chops."

Once you finally got the band together, how long did it take for them to jell?

"A little bit of time. We rehearsed for about a month, for probably 15 hours a day."

That would make a band jell.

"You might think that, but in all honesty, there's nothing like hitting the road that makes a band a band. You gotta pound the pavement. In all of my years of playing, it's always the same. Players play a certain way when there's an audience out there and the lights come up."

[laughs] "That's exactly right! That rush of adrenaline. That fear, that feeling of…'Will we screw up?' All that. That's what makes a band a band. After a few days, people start calming down. They get used to the fear almost, although it never really goes away."

I imagine Freak Show Excess was a blast to play with two violinists. You've described it was Bulgarian wedding music.

"That's right, and it was a total joy to play live. It was great having Alex and Ann Marie tear into that. They had never played it before so they had to learn it from transcriptions, but boy, once they got it, forget it - they really went to town!"

What would you say was the most challenging piece of music in the set?

"I'd say Now We Run, the opening number, because the time signature is changing constantly. But the song has a groove to it, too, so it's not…you know, you don't want it to sound clinical; it's music, not math homework. [laughs]

"Angel Food, too, was a real challenge because there's such huge dynamics in the song. Everything in that piece has to be played with such precision and feeling."

Do you sometimes feel at odds trying to write very complex pieces of music that can still connect with people emotionally?

"It's a funny thing. Writing complex music is an art. What I mean to say is, it's an art to make it sound musical and entertaining. You don't want it to sound complex. I want it sound natural and easy.

"You know, anybody can write something weird for weird's sake - that's not what I'm all about. I want to create music that everybody can get into. Hey, some of my favorite songs have just three chords."

What guitars did you use in the concert for the DVD? I see your famous EVO guitar in the trailer, but there's also some other ones.

"There's EVO, sure, but FLO is in there probably more than EVO. Those are my workhorse guitars and I can't see going on stage without 'em. I did use a really beautiful guitar in the opening song. It's the 20th Anniversary Jem and it's translucent and it has a green light that comes on...absolutely gorgeous. I look at it on the DVD now and it just blows me away.

"The black Jem, I use that for Building The Church. You know, there is a certain showbiz aspect to what I do and why I might play a certain guitar. At a certain part in the show you might want to give the audience something new to look at. Or because we were filming the concert I thought, Hey, let me try this one and see how it looks on film. There's slight sound differences to my guitars, but not great ones."

How did this new band challenge you as a player?

"Hmm. That's a good question. [pauses] You know, there's parts ofthe show were we push each other, and I just love that. The song called The Murder, we really push one another.

"More than anything, the biggest challenge was being a good bandleader. It sounds trite, but you can't just be a taskmaster. You have to build a family to have a great group. That doesn't just happen; you have to gain everyone's trust and respect. You have to earn it. Be a good person and it'll all come back to you."