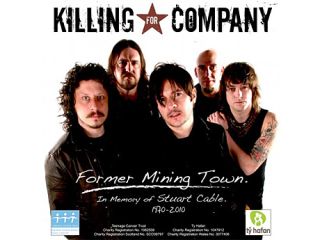 Stuart Cable, pictured left, with his band Killing For Company on the cover of a recent charity single.

Ex-Stereophonics drummer Stuart Cable choked to death on his own vomit after a three-day drinking binge. According to BBC News, the inquest in Aberdare, Wales confirmed a verdict of accidental death.

The inquest heard that Cable, who was sacked by Stereophonics in 2003 but had recently started a broadcasting career, along with drumming for the band Killing For Company, began an extended drinking session drinking at a rugby club, where he was accompanied by his ex-wife, Nicola, and son on Friday 4 June.

Cale presented his BBC radio show the following day and then continued drinking that evening in his local pub. He went home and drank until 5am. More drinking ensued, carrying over into the next afternoon (Sunday).

According to Detective Sergeant Richey Jones, "Stuart was extremely drunk but got a bottle of vodka out of the fridge and continued drinking it neat. He also drank Jack Daniels. He fell asleep on the sofa and Rachel [his girlfriend] later went to wake him by tapping his head and lifting his eyes."

Her efforts to wake Cable failed, and she went to bed without him before she found him collapsed on the floor at 5:30am on Monday 7 June. "She knew instantly that something was wrong," said Sgt Jones. "She checked his airways and noticed there was vomit."

The pathologist confirmed that Cable's death was caused by him choking on his own vomit brought on by acute alcohol poisoning.