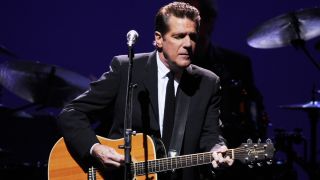 Glenn Frey, guitarist, singer and songwriter with the Eagles, has died at the age of 67, it has been announced. A statement posted on the band's website confirmed the sad news, adding that he passed away in New York on Monday.

Frey had been ill for several weeks, and died from complications related to rheumatoid arthritis, acute ulcerative colitis and pneumonia.

"The Frey family would like to thank everyone who joined Glenn to fight this fight and hoped and prayed for his recovery," the statement continues.

"Words can neither describe our sorrow, nor our love and respect for all that he has given to us, his family, the music community and millions of fans worldwide."

Frey wrote or co-wrote many of the Eagles biggest hits, and sang lead vocals on a good number of them, too. He also enjoyed a successful solo career, scoring a worldwide hit in 1984 with the Heat Is On. In 2012 he spoke to MusicRadar about After Hours, his covers album that was also his first solo release in 20 years.

But it's for his work with the Eagles that Frey will be most fondly remembered. Having disbanded in 1980, the band reunited in 1994 when they released their Hell Freezes Over album - the title being a reference to what fellow member Don Henley would say when asked when the Eagles were reforming.

"Rest in peace, my brother"

In a statement, Henley said: "He was like a brother to me; we were family, and like most families, there was some dysfunction. But, the bond we forged 45 years ago was never broken, even during the 14 years that the Eagles were dissolved.

"We were two young men who made the pilgrimage to Los Angeles with the same dream: to make our mark in the music industry - and with perseverance, a deep love of music, our alliance with other great musicians and our manager, Irving Azoff, we built something that has lasted longer than anyone could have dreamed.

"But, Glenn was the one who started it all. He was the spark plug, the man with the plan. He had an encyclopedic knowledge of popular music and a work ethic that wouldn't quit. He was funny, bullheaded, mercurial, generous, deeply talented and driven. He loved his wife and kids more than anything."

"We are all in a state of shock, disbelief and profound sorrow. We brought our two-year "History of the Eagles Tour" to a triumphant close at the end of July and now he is gone. I'm not sure I believe in fate, but I know that crossing paths with Glenn Lewis Frey in 1970 changed my life forever, and it eventually had an impact on the lives of millions of other people all over the planet. It will be very strange going forward in a world without him in it. But, I will be grateful, every day, that he was in my life. Rest in peace, my brother. You did what you set out to do, and then some."