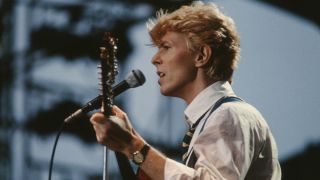 David Bowie, who has died aged 69, was not only a huge star in his own right but also a massive influence on a wide cross-section of artists who followed him.

Following his passing, those who worked with, admired and loved him have taken to social media to pay tribute to his genius. We'll be updating this page with those tributes as they come in.

Tony Visconti: "He always did what he wanted to do. And he wanted to do it his way and he wanted to do it the best way. His death was no different from his life - a work of Art. He made Blackstar for us, his parting gift. I knew for a year this was the way it would be. I wasn't, however, prepared for it. He was an extraordinary man, full of love and life. He will always be with us. For now, it is appropriate to cry."

Iggy Pop: "David's friendship was the light of my life. I never met such a brilliant person. He was the best there is."

Paul McCartney: "Very sad news to wake up to on this raining morning. David was a great star and I treasure the moments we had together. His music played a very strong part in British musical history and I'm proud to think of the huge influence he has had on people all around the world.

"I send my deepest sympathies to his family and will always remember the great laughs we had through the years. His star will shine in the sky forever."

Brian May: "I woke up late, after a long night, to shocking news. David Bowie gone. He was a fearsome talent, and the loss to Music and Culture from his passing is inestimable..."

Roger Taylor (Queen): "David Bowie: The cleverest and most interestingly brilliant man of our time. What a vacuum he leaves, and how he will be missed."

The Rolling Stones: "The Rolling Stones are shocked and deeply saddened to hear of the death of our dear friend David Bowie. As well as being a wonderful and kind man, he was an extraordinary artist, and a true original."

Yoko Ono: "John and David respected each other. They were well matched in intellect and talent. As John and I had very few friends we felt David was as close as family.

"After John died, David was always there for Sean and me. When Sean was at boarding school in Switzerland, David would pick him up and take him on trips to museums and let Sean hang out at his recording studio in Geneva.

"For Sean this is losing another father figure. It will be hard for him, I know. But we have some sweet memories which will stay with us forever."

Pete Townshend: Woke up to the awful news that my lovely friend David Bowie passed away. I am so deeply sad, but he just completed a radical and audacious new album, and that is a great thing. Personally I am grateful to him for doing it...

Georgio Moroder: "What a great loss... I was fortunate to work with a genius on 'Cat People.'"

Pharrell Williams: "David Bowie was a true innovator, a true creative. May he rest in peace."

Kanye West: "David Bowie was one of my most important inspirations, so fearless, so creative, he gave us magic for a lifetime."

Marc Almond: "It's not often I truly cry at the loss of an artist but I'm devastated. He meant so much. Goodbye David Bowie and our youth. We loved you. X"

Paul Epworth: "One of the greatest songwriters, lyricists, innovators and true artists can't even do the breadth of his influence justice."

Gene Simmons: "David Bowie, you will be sorely missed. Bowie's 'Changes' and the Ziggy story songs were a major influence for me."

Josh Groban: "He never seemed of this earth. Now he's left it. He bent rules, gender, genres, and our minds. RIP David Bowie. One. Of. A. Kind."

Nickelback: "Very saddened to hear about David Bowie. Timeless music by a fearless artist...thank you."

Chris Difford: "Without David Bowie in my life I may not have had the courage to start writing songs, and without that courage I may not have placed an advert in a sweet shop window for a guitarist to join a band. Bowie unlocked the youthful dreams I had of being me. He gave so many teenagers the right to wear their pulling pants every day of the week, people of all persuasions. He turned me on and sharpened my pencil."

Jimmy Page: "David Bowie was a unique artist with a vision that changed the face of popular music. He is greatly missed. Rest in peace, David."

John Taylor (Duran Duran): "Without David Bowie, there would be no Duran Duran. It's true and always thanks to him for that..."

John 5: "RIP to an icon and music genius"

Queens of the Stone Age: "See you in Valhalla Black Star."

Lonely the Brave: "Can't quite believe this. The man was a true genius and icon and influenced so many. A very sad day indeed. R.I.P David Bowie."

Goldie: "Thank you David, It was a pleasure to call you a friend. You're an icon, an inspiration and a fearless creator.It's now time to celebrate his legacy - for all the makers, artists and do-ers out there we may have lost one of our own but that doesn't mean we can't strive to leave our mark in the way that Mr David Bowie did.Rest In Peace from Goldie x"

Rush: "Woke up to the news of David Bowie leaving this world. Crushed is the right word. He was a monumental artist...immortal. We used to play Suffragette City in our bar days... RIP David Bowie"