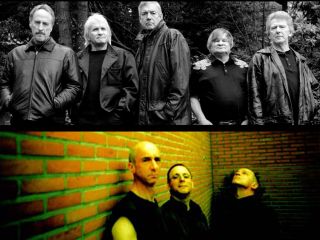 Reformed garage rock legends The Sonics (above) and post-punk icons Wire (below).

Meltdown Festival returns to London's Southbank Centre this weekend. This year the annual series of events, which runs from now until the end of June, is curated by none other than former Kinks frontman Ray Davies.

One of the highlights of this year's event has to be the joint billing of reformed garage rock icons The Sonics with legendary post-punk originators Wire on Saturday 18 June. And we've got a pair of tickets to give away to the gig.

Not only that, but we've copies of The Sonics' 2010 comeback release, 8, and Wire's recent, critically acclaimed album Red Barked Tree - both in both vinyl and CD form - to throw in too. Be quick, the competition closes at midnight on Monday (13 June).

Check out full details of the gig over at the Meltdown Festival site, or check out the full listings for this year's Meltdown Festival, including shows from the likes of The Fugs, Nick Lowe, Yo La Tengo, Current 93 and Ron Sexsmith & Anna Calvi.

To be in with a chance of winning two tickets to The Sonics and Wire at Meltdown Festival, plus The Sonics' 8 CD and vinyl and Wire's Red Barked Tree CD and vinyl, just answer the following question...

What was the title of the collaborative album that Meltdown curator Ray Davies released last year?

A. Ray Davies And Friends

B. See My Friends