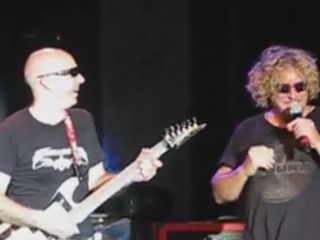 Chickenfoot's first show certainly didn't disappoint. In fact, the gig was so hot and Seattle's El Corazon was so packed that the fire department showed up and nearly shut the whole thing down.

"To use a well-worn cliche, the gig was totally out of hand," says Carter, Chickenfoot's co-manager (who reps the band with Mick Brigden). "I'm not sure if we oversold the place, but people were crammed in like sardines.

"It was an incredible start to the tour, and from the reacton of the crowd, I think this band is already delivering the goods."

Chickenfoot - which if you didn't know, includes Sammy Hagar, Joe Satriani, Michael Anthony and Chad Smith - were nine songs and 40 minutes into their main set when Hagar told the crowd,"The fire department's going to shut us down in 10 minutes...This is the end of the regular set."

Before matters could be straightened out, Hagar promised the audience a 45-minute encore to make up for the delay.

After a 20-minute break, back to rocking

Some clubgoers had to be herded out to make the room fire department-safe, and after 20 minutes the band made good on Hagar's words and tore through six more tunes, including Montrose's Bad Motor Scooter (which Hagar wrote) and Deep Purple's Highway Star.

"Having to stop a show in the middle is not what we were planning," says Carter, "but I guess it's just an indication that there's a real hunger for this band and the kind of music they're making. After this run of club shows, we're obviously going to have to book larger venues."