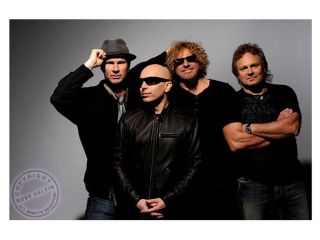 Chickenfoot's album will be out soon (Image credit: Ross Halfin)

Available on both the official Chickenfoot website and the band's MySpace page, the songs are called Soap On A Rope and Down The Drain.

MusicRadar was treated to a special advance preview of the album recently and will give you a full review in the coming weeks. In addition, keep checking back with us for an exclusive podcast interview with Chickenfoot - a no-holds-barred, riotous affair, we assure you.

In other Chickenfoot news, the band will be featured as the cover subjects in the June issue of Guitar World, on sale 7 April.

In the meantime, crank up the tunes and let us know what you think.

Band photo courtesy of Ross Halfin. Be sure to visit the official Ross Halfin website.