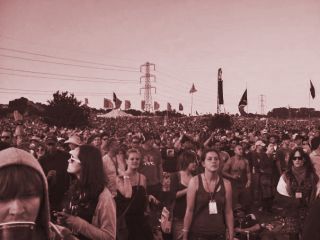 For all the furore over Jay-Z's headline slot and Amy Winehouse's alleged pugilism, my long weekend in Worthy Farm once again proved beyond doubt that there's much more to the festival than the main stage's star attractions.

On the smaller stages, a couple of performances saw the festival buzz barometer's needle flickering out of control.

Friday evening saw eclectic Brooklyn duo MGMT turn a bursting-at-the-seams John Peel tent into a rainbow riot as the much-tipped band left the audience singing the refrain from Kids long after the caped electro crusaders had left the stage.

The night before, Glasvegas caused similar scenes of pandemonium, their Jesus And Mary Chain-meets-Phil Spector anthems rendering the Queen's Head tent impenetrable and sparking off football terrace-style sing-alongs. All the more remarkable given that their debut album is still months away from release.

While Jay-Z was busy lampooning his critics on Saturday night with an intro video montage and cheeky cover versions and mash-ups, I was back at the John Peel tent, watching Biffy Clyro rock very hard indeed.

Glastonbury 2007 saw the band limited to a half hour set as they had to be flown out to support Muse in Paris, but this year's Saturday headline slot allowed the bare-chested Scottish trio room to play a blistering, career-spanning set.

It has to be noted that the much-expanded John Peel tent could have benefited from a louder PA rig. Right down at the very front was the only place to be truly immersed in volume, and also, as it turned out, hassled by a complete stranger attempting to convince people to go and watch Squarepusher.

Unlike 2007 when both The Killers and The Arctic Monkeys suffered from lacklustre sonics, the Pyramid stage's PA system was plenty loud enough, and only chose to cut out briefly during Neil Diamond's Sunday afternoon set. Possibly in protest.

Other highlights included a heroically shambolic Brian Jonestown Massacre, and stellar performances from Martha Wainwright, Seasick Steve, Band Of Horses, The Raconteurs and The Verve, but for sheer spine-tingling emotion it was hard to beat Leonard Cohen's double whammy of Suzanne and Hallelujah just as the setting sun disappeared behind the hill on Sunday evening.

In short, the sun shone and dried the mud, the liquid refreshments went down very easily indeed and an extremely good time was had by all. Except possibly the poor guy who slipped in the mud and snapped his ankle on the Friday morning. Ouch. Roll on 2009…