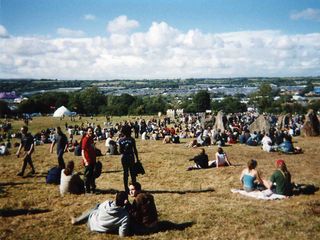 Evidence that the sun sometimes shines at Glastonbury

As a festival-goer of ten years experience who has been to Glastonbury four times and sampled the delights of Reading, Leeds, V and the Isle Of Wight on several occasions I really don´t see why all of the media attention this year is concentrated on the perceived lack of appeal of a certain Shawn Corey Carter, aka Jay-Z.

The feeling in much of the media and across numerous festival forums seems to be that Jay-Z isn´t Glastonbury headline material, and this alone accounts for the festival failing to sell out on the first day of ticket sales for the first time in years.

"If a few lightweights have been scared off by the rain, the mud and a rap star then that´s fine, we´ll still have a good time without them."

However, it really can´t be as simple as that, can it? Jay-Z is a huge worldwide star and one of the biggest names in hip-hop, itself the most commercially successful musical genre in the world today. He isn´t a Glastonbury headliner in the Radiohead or Coldplay mould, but the music policy at the festival has always been the most eclectic of the mainstream events.

The Sunday climax of 2007´s festival saw such diverse artists as Shirley Bassey, The Who and The Marley Brothers amongst the acts performing on the Pyramid Stage, and nobody seemed particularly perturbed. In fact, from where I was standing and admittedly through a fairly inebriated haze, despite the diabolical weather, everyone looked like they were having a hell of a good time.

Indeed, the near-biblical meteorological conditions at the last couple of festivals have probably had a great deal more impact on ticket sales - although selling 100,000 tickets at £155 a pop on the first day is hardly a disaster - than Jay-Z has. I´m sure it also hasn´t helped that fellow headliners Kings Of Leon and The Verve are also playing the V Festival and T In The Park this summer.

For more on Glastonbury 2008, check out this Guardian blog, or visit the festival´s official website for current ticket information.

Ultimately though, most Glastonbury veterans will tell you that it´s about much more than just the music. And despite an innate dislike for hippies, I´m inclined to agree. It´s a vibe thing, man. Or more specifically, it´s a refreshing lack of corporate advertising without a cynical bar token scheme in sight. You are also unlikely to see people having bottles of water or apples confiscated by fascistic, paranoid security guards as you might at some of the summer´s other big outdoor events.

If a few lightweights have been scared off by the rain and the mud and a rap star then that´s fine, we´ll still have a good time without them. Karma definitely owes me some sunshine this year, though…