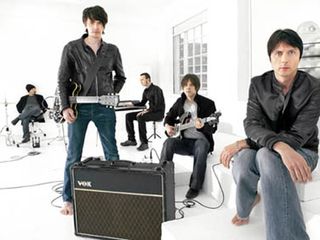 Bernard Butler (standing with Gibson), 2009's Producer Of The Year

Duffy was at the ceremony to hand Butler his trophy and the Brit statue for best producer.

The guitarist-turned-producer beat Brian Eno, who has recently worked with U2 and Coldplay, and Steve Mac, who has produced albums for Leona Lewis, Boyzone and Il Divo.

At the ceremony, Butler said artists liked him because he knew what they wanted and how they thought. Producing was a difficult task, but added that there was a "great prize" on offer.

"Not these [awards] - I mean the prize of making a great record that moves somebody. I'm completely devotional about that idea. I have been since I was a kid.

"Pop music has currency that goes beyond lots of other art forms. If you can help lift somebody for three minutes out of a dreary existence then I think that's a major achievement."

At the same awards, Brian Eno collected the Music Producers' Guild (MPG) trophy, in the shape of a golden microphone.

"It's actually a really big honour to be presented with a prize by your peers," said Eno. "Especially when there are so many of them in the room that you admire and whose work you follow."

Elbow won two prizes - best UK album for The Seldom Seen Kid and best UK single for One Day Like This. Both were produced by Elbow's keyboard player Craig Potter. The award for international producer of the year went to Gnarls Barkley's Danger Mouse, who has also produced for Gorillaz, Beck and Martina Topley-Bird. Calvin Harris, best-known for his hit collaboration with Dizzee Rascal, won the prize for best remixer.