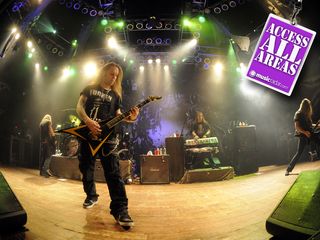 The latest in a series that has so far included U2, The Killers and Slipknot sees us check in with the main dude behind the scenes for Finnish metallers Children Of Bodom.

So busy he forgot to tell us his surname, Neubi holds down a host of duties in the Children Of Bodom tech crew. Not only is he tech for one of the wildest metal players in town, Alexi Laiho, but Neubi also techs for bass player Henkka Sepällä.

Did we mention that he's also production manager and stage manager for the Espoo metallers?

"I've been working with Alexi since 2003, when I met while working for a German band who were headlining and Bodom were the support band." Neubi tells us, before explaining that it wasn't all plain sailing from the off...

"A part of my deal at that time was to take care of the support bands as well as Bodom, but there was a huge miscommunication. The headliners told me that I didn't have to tech for the support bands - only for them. Bodom were told it was a co-headline tour with full service from techs. They were really pissed and almost on the way home."

A baptism of fire for Neubi, but they managed to overcome their teething problems. "During the tour we started to respect and like each other, so after that Alexi asked me if I wanted to be his tech."

Having also worked for Amon Amarth, Sonata Arctica and more metal bands that we can list here, Neubi gives it to us straight about tech-ing at festivals.

What do you need to watch out for when tech-ing at a festival?

"Time. If you're not headlining the festival, you can't set up your gear in the time that you're used to. You need to take care that you will get space behind the stage early enough to set up your gear and to check it properly.

Another thing to consider at festivals is being able to check if your gear is working. Sometimes the festival doesn't provide power at the back of the stage, so you can't even check if your amps are working."

What essential items do you stock in your tech kit bag?

"Most festivals we play now, we're headlining, which means I always have my big tech case with me. If we play festivals where we can't bring all our equipment because we have to fly in, I'll take my small tech box from Ultra Case with me.

"In this box is almost everything I need: a spare tuner, tools for string changes, a multimeter to check power on-stage and, of course, enough picks for Alexi because he likes to throw them into the crowd.

"I also have a spare transmitter in case something goes wrong with the transmitter on Alexi's guitar strap - he handles his guitar roughly during the show, with 360 degree swings!

"Also in my box are my in ear monitors, which I use during the whole show. They are very important because Alexi's cabinet is located stage centre, and without them I have no chance of hearing if the sound is still okay or if Alexi's guitars are still in tune."

As production manager, are you usually the first one to get things moving?

"Yes, my day starts pretty early. First of all I get a coffee, otherwise my system will not run properly. Then I measure the stage and fixing positions of the risers. When the gear is on-stage, I'll set up the hardware (amps and cabinets) and sort out all the cable wire.

What are the potential problems that can arise at a festival?

"The frequencies from the wireless systems. If you can't check in advance whether your frequencies are clean, you may have to spend a lot time to find clean frequencies.

"The other big problem at a festival show is time. Thankfully, most festivals are now using two stages, so the change over times are longer. However, some festivals are still scheduling 20-30 minute change overs.

"In my view, that's really stupid. To get the previous band off-stage and then get all your gear on-stage needs time. You also need time to do a proper line-check, and just because the lines are working doesn't mean that the sound front of house is also OK. The outcome is that the band has to start the show and the sound for the fans is really crap for the first couple of songs."

What advice would you give to a new tech or production manager working his or her first festival this summer?

"Have a good relationship with the stage manager and sound crew on-stage, because these guys are working there the whole day. Be friendly and listen to them, and make sure that the stage hands are handling your gear carefully.

"Try to get enough time to prepare your gear, because when you're in hurry you make mistakes and your musician will not be happy if he has problems during the show.

"Most importantly, keep a long, spare instrument cable with you, because if there are any problems [during the show] it will mostly be the wireless system. Do not try to fix this during the show: just move the musician onto cable to give yourself the time to take a look at what is wrong with the wireless."