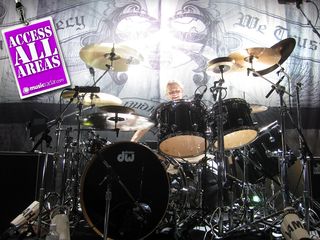 Following on from the unsung heroes behind last week's Glastonbury headline set from U2, here are the men who will make sure that Iowa's heaviest export rock loud and hard at the UK leg of Sonisphere on Sunday 10 July.

Head gaffa for one of the biggest metal bands in the world, Gary Garner has both hands full with the extensive tech crew that surrounds Slipknot. Add to that a huge pyro-filled production and a rotating drum kit riser, plus enough gear and rigging to full six semi trucks, and it's easy to see why Gary's job starts well in advance of Slipknot's actual festival performance or tour.

Working with the band for seven years, Gary explains how he got in with the Des Moines massive. "I was appointed production manager in 2004. I worked for Slipknot before then in an assistant capacity and took the main job next time around. I worked closely with their tour manager while I was working with Metallica, and that helped me secure the gig."

Planning Slipknot's show meticulously from start to finish, Gary reveals the surprising amount of work that goes in to getting the Idaho band on the road.

As production manager for Slipknot, what does your job entail?

"My job is the first to start on any tour. I work closely with management and the band's agent during the process of making sure [potential] venues can fit a Slipknot production, because it's so large and complex. Once the venues are agreed, I start putting a crew together and getting pricing for our audio, lighting and pyro needs. I then book all my crew's travel and hotel requirements, and book all transport for the whole touring entourage.

"After that, I'll start advancing our needs with the venues or festivals and work through any problems presented by taking six semi trucks in. I'll organize all local crew required for load in, show call and load out, which will mean an 18 hour day for most of my crew."

What about transporting all the gear needed for such a huge production?

"With Slipknot being a world touring act, the shipping of all their gear from continent to continent is my responsibility too. Each piece of gear has to be recorded and measured, weighed and valued, and entered into a carnet document. When that's done, we can travel anywhere in the world with the gear recorded on those documents."

How many members are in your production crew for this summer's festival appearances?

"On this upcoming summer festival tour, our main body of crew with production staff and so on is 20. I also have five truck drivers and four airline staff, so 29 in total."

How do you prepare your crew for a string of festival dates?

"We rehearse everything we can for festivals. We'll maybe change a few items of production to make sure that there is enough stage space for all the other acts on the bill. It's very easy to take up all the real estate on these festivals, but that's not fair on the other acts, so as a crew we try to accommodate everyone's needs.

"Our crew will be at these festivals for at least 14 hours a day, so feeding them all and making sure they are safe is of real importance. We also work hard on all pyro installations because of the major risks they present on stage."

What are the trickiest aspects of putting on a Slipknot show at a festival?

"A festival is an entirely different beast to a normal gig. You have limited room and limited time to achieve a production result that normally you have a full day and all the room you need to achieve it in. Weather conditions are always a concern. I have to use some heavy lifting gear to get Joey's drum riser on-stage, and wet, slippery ground makes this a nervous time. Keeping everything dry and safe is a major priority."

As production manager, do you need to have a working knowledge of every instrument in the band, as well as lighting, the sound desk and so on?

"I think its imperative that you have a working knowledge of each instrument and each section of your production. Without this, how would you expect to lead your crew and help troubleshoot any problems?

"In the process of pricing tour related items for production, you have to have a good knowledge of what you're pricing. This doesn't mean you have to be a front of house sound engineer to order a PA system, but you need to have a good working relationship with your team to be able to work through your needs together while keeping the budget in mind."

If one of your techs falls sick at a festival, do you step in and cover them?

"This is an industry where you do not take the odd day off. If you're on tour, you're working. If something serious happens to a crew member, we all help cover his or her position and replace them as soon as possible until they are well again."

What are your duties when Slipknot are on stage performing at a festival, and when they come off?

"While the show is running, I will be watching from stage right, making sure that all the production elements are working. I will more than likely control the lift that turns Joe and his drum kit upside down and spins him around. After the show, we start the process of breaking down and putting all the gear in the trucks. Then we go do it all over again in a different country."

Ronnie Lee Hise Jr is one popular guy. Regularly called back for gigs with drummers he's worked with over the years, Ronnie works hard to establish and maintain great relationships with all of the drummers he techs for.

The result? He's one of the first drum techs they think of when heading out on the road. "It's good to have guys keep calling you back." Muses Ronnie. "I think it means that the drummer or band you are working for likes your work, and personality can be a big deal here. If they keep calling you back, it means they like having you around. If you can't get along with people, your phone will quit ringing real fast."

Having worked for Danzig, Deftones, Disturbed and Stone Sour among others, Slipknot drummer Joey Jordison is a favourite of Ronnie's. "I first worked with Joey in 2006, when he was drumming for Ministry. I also worked with Joey while he was playing for Rob Zombie, as well as on the Slipknot 'All Hope Is Gone' Tour. I will be with him on the Slipknot European tour this summer, too. Joey is one of my favourites to work for, so I'm glad he calls me when he needs someone."

A drummer for years before his tech-ing career started, Ronnie came to the realisation very quickly that being in the drum industry doesn't mean you have to play in a band. "When I realized I probably wasn't going to 'make it big' as a drummer, I tried to think of ways to remain in the business, have fun with it, and make a living. For me, drum tech-ing is the next best thing."

Here are Ronnie's words of advice and an insight into tech-ing drums at a festival...

What is your general take on tech-ing at a festival?

"Festivals are way more of a 'throw and go'. You are limited on time because there are so many bands and such little space. You really have to work well together with the other techs in your camp, and with other bands' techs too. At a normal gig, in most cases you can take your time and enjoy more room to work in. At a festival you have to really be on your game. It can be intense at times."

What potential problems do you keep an eye out for when tech-ing for Joey at a festival?

"As a drum tech, I'm worried about mic lines and trigger lines. Some guys use just mics, but for Joey we will be using both, so I make sure my end is covered and that I've gone through everything. Of course this still isn't a guarantee, so you just do what you can with the time you have. Although sometimes the problem isn't my end. It could be a monitor or front of house issue. We're all pros out on the road, but sometimes things just happen. In those situations, you do what you can and hope for the best."

When heading out to a festival, what items do you stock in your tech kit bag?

"With a band as big as Slipknot, we're lucky enough to ship everything I need: from extra cymbals and drum heads, to hardware and so on. Plus I ship my work box, which is filled with tools, extra small parts for kick drum pedals and cymbal stands, and so on. I try not to chance anything, so I bring everything that I can. At festivals you're in the middle of a field where parts are not going to be easily available, so I try to be ready for anything."

What does your day involve when tech-ing for Joey at a festival?

"I'm in charge of setting up his drums, cleaning them, tuning them and changing heads if need be so that they look and sound their best. During the show, I'm right behind him, hidden somewhere close by and watching to make sure that nothing goes wrong. If it does, I fix it as soon as possible. Afterwards, I break everything down and get it in the truck. I don't usually see Joey during the day. The first time I see him is usually after the mask is on and the intro is playing, but we do try to hang out after the show."

What do you need to watch out for when working for Joey during a show?

"Joey is fairly easy to work for. As long as I do everything correctly beforehand, there shouldn't be any problems during. I'm always looking for the same things with any drummer I'm working for. For example, 'did anything move?' 'Is everything sounding as it should?'

"Most of my work is done before or after the show. If I've done everything right and I've gone over everything two or three times, it should be okay. Anything can happen though, so I pay attention at all times during the show."