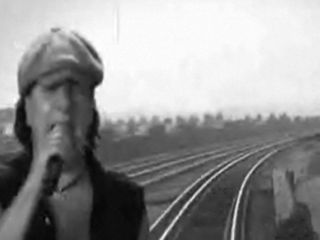 If you want video...

"Let there be light...sound...drums...guitar...Let There Be Rock!" That's what you get in AC/DC's new video to Rock 'N' Roll Train, the first single from the band's upcoming album, Black Ice.

In short, the David Mallet-directed clip has everything you could want in an AC/DC and nothing you don't: Angus Young in a schoolboy outfit, a vest-wearing Brian Johnson singing his guts out, and the band coming heavy to a fist-pumping crowd who no doubt had no problem hanging out for take after take. (Oh, and there's some footage of train crashes too - after all, the track is called Rock 'N Roll Train.)

In other AC/DC news, the band's North American tour has been announced, and with it, a new paperless ticketing system will be implemented.

The paperless tickets will "help ensure fan club members and fans purchasing designated seats will be able to secure tickets at face value," Ticketmaster said in a statement. Both Tom Waits and Metallica have embraced the new ticketing program, which requires buyers to show identification when arriving at the venue. Hey, whatever works.

To all those who get tickets, we salute you. Meanwhile, watch the video. And when you're done, check out MusicRadar's exclusive track-by-track guide to Black Ice - the first review you'll see anywhere in the world.