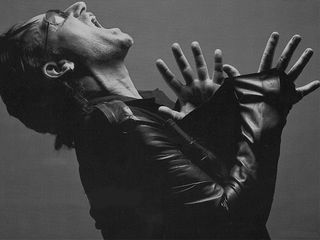 U2's No Line On The Horizon is this week's big seller

This week, U2 have been absolutely everywhere. Their promo juggernaut is rolling round the globe but are the wheels looking wobbly?

U2 will easily secure a Number 1 album on both sides of the Atlantic this week, but some insiders are already suggesting their allure (or just that of CDs) is further fading. Digital Music News predict first weeks sales of 400K-500K for No Line On The Horizon in the USA - good by most standards, but way behind the 800K-plus sold in the first week of 2004's How To Dismantle An Atomic Bomb. Cheer up U2 accountants, the band have another album out later in 2009.

Music streaming site Spotify is being acclaimed by many as the future of the music business. Sadly, it was hacked this week and up to 10,000 users personal details, including e-mail addresses, dates of birth and addresses, were stolen. Whoops. We guess that's free 'data' for you…?

3. Kanye West is in love. With himself

Kanye West: not able to see himself

This week, the ever-quotable Kanye West said: "I am God's vessel. My only pain in life is that I will never be able to see myself perform live." Feel his pain.

Times are tough for new pop stars. Lily Allen says she has had to sell her £35,000 BMW 320 convertible car.

"I've been hit big time by the credit crunch," Allen says. "Actually, I just had to sell my car because I'm so broke. I'm waiting until I get the royalties from the album and all the radio plays but that takes about a year."

Allen's second album, It's Not Me, It's You, has just been Number 1 in the UK and Number 5 in the US.

MJ announced 10 shows at London's O2 this week. He spoke for no more than three minutes at the venue press conference, and MJ fans paid up to €300 for a front-row place. Tickets to see Michael Jackson actually perform in July are cheaper. Here's our dream set-list.

Following Heidi Klum's appearance in a TV ad for the Guitar Hero game, lingerie model Marisa Miller is next. MusicRadar mentions this only as a Public Service Announcement, of course.

Rider demands of the rich and famous are legendary, whether it's M&Ms or KY Jelly for Van Halen. Snow Patrol's main demand on their current tour rider is apparently… a table tennis table. We're liking Gary Lightbody more…

It seems music listeners have finally decided they're OK with (usually) lower-quality MP3s on iPods.The relentless march of progress, or just a deaf generation? You decide.