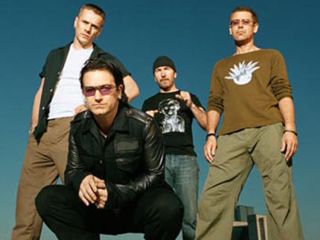 U2 fans will be staying up late and/or programming their TIVOs the week of 2 March, as the band will perform five consecutive nights on The Late Show With David Letterman.

News of the group's week-long TV residency was announced today on the official U2 website. It will mark the first time a musical guest will perform five nights straight on the CBS program.

Not so coincidentially, U2's new album No Line On The Horizon will be released the same week of the Letterman show run.The record will hit the UK on 2 March and the US the following day.

No telling how many songs U2 will play during their extended run. A generous portion of the new album is certainly to be expected, but older gems could pop up - the band had been digging into their back catalog on their last tour, even playing songs such as I Will Follow and The Electric Co. (below) from their 1980 debut, Boy.