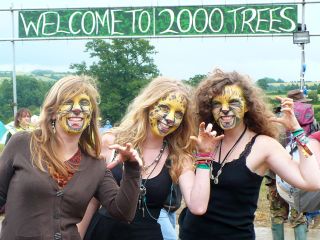 PRESS RELEASE: An award-winning weekend of live music and camping on 16-17 July 2010 in the picturesque Cotswolds, with more than 60 acts on three stages, plus comedy, DJs, headphone disco, trader village, great food and drink, and campfire sing-alongs to keep the party spirit going till dawn.

In its short history 2000trees has established itself as one of the leading small festivals in the British summer calendar. Created by a group of friends in 2007, the festival was born out of frustration with the ever increasing corporate sponsorship and mass advertising nature of the larger traditional British festivals.

With up to 4000 music fans expected, 2000trees is promoting the finest homegrown talent emerging from the vibrant British music scene. It's the perfect place to unearth tomorrow's stars today. With an eclectic line-up spanning many musical genres, this intimate and friendly festival has become a haven for music fans - many of whom discover their new favourite bands at the event.

2000trees is also 'A Greener Festival Award' winner for it dedication to being one of the UK's greenest festivals. And it offers great value for money, with tickets just £50 for a full weekend camping pass. Children under 10 go free but children under 16 must be accompanied by an adult.

More information is available from www.twothousandtreesfestival.co.uk

The full line-up so far: