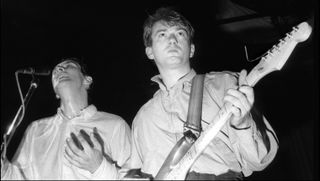 Influential Gang Of Four guitarist Andy Gill has passed away at the age of 64. The news was broken by the band on their social media channels on Saturday (1 February) with the following statement:

"This is so hard for us to write, but our great friend and Supreme Leader has died today. Andy’s final tour in November was the only way he was ever really going to bow out; with a Stratocaster around his neck, screaming with feedback and deafening the front row.

"His uncompromising artistic vision and commitment to the cause meant that he was still listening to mixes for the upcoming record, whilst planning the next tour from his hospital bed. But to us, he was our friend - and we’ll remember him for his kindness and generosity, his fearsome intelligence, bad jokes, mad stories and endless cups of Darjeeling tea. He just so happened to be a bit of a genius too.

"One of the best to ever do it, his influence on guitar music and the creative process was inspiring for us, as well as everyone who worked alongside him and listened to his music. And his albums and production work speak for themselves. Go give ‘em a spin for him... Love you mate.

Gill's influence over guitar music is significant. He was born in Manchester in 1956, and formed Gang of Four in Leeds in 1976. Hendrix was an early inspiration but Dr Feelgood's Wilko Johnson can be clearly detected by Gill's tight, urgent rhythms in the poitically-charged band.

The groove of Motown also fed into his approach. "With Motown, the way the grooves were put together really got under my skin," Gill said in 2017. "And people like Steve Cropper, who is an amazing, underrated rhythm guitarist.”

Gill released 10 albums with Gang Of Four in their 40-year history and was the only founding member through that whole time. With Kurt Cobain, Michael Stipe and even INXS's Michael Hutchence heralding the band's impact on their own approaches, Gill's influence went beyond his records and into production.

The Red Hot Chili Peppers' Flea called Gang Of Four, “the first rock band I could truly relate to” and the guitarist would produce the band's self-titled 1984 debut.

He went on to work with bands including the Jesus Lizard, Therapy?, The Stranglers, Killing Joke, The Futureheads,  Bis, Young Knives, as well as producing six Gang Of Four records.

Gill’s wife Catherine Mayer tweeted in tribute: “This pain is the price of extraordinary joy, almost three decades with the best man in the world.”

So sorry to hear of the passing of the great #AndyGill, guitarist of Gang of Four. One of my principal influences on the instrument as his jagged plague disco raptor attack industrial funk deconstructed guitar anti-hero sonics and fierce poetic radical intellect were formative for me. So glad I got to see him and revel in his incendiary art and wry wit several times over the past year. He was really, really fucking great. Tom Morello