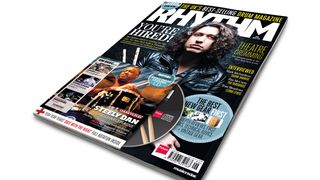 Some of you will no doubt already be in possession of your copy, but June's Rhythm will be on newsagents' shelves and available digitally from this Tuesday. It's got Ilan Rubin on the cover, and inside the mag Ilan shares his secrets on how to bag the big rock gigs - and he should know, he's Paramore's new drummer, Nine Inch Nails' drummer, and he's worked with everyone from Lostprophets to Angels & Airwaves.

Also in the issue are Skunk Anansie's Mark Richardson and The Yardbirds' Jim McCarty, and Rhythm begins a two-part series looking at what it takes to be a Theatre Drummer.

You can learn tracks by Paramore, Yeah Yeah Yeahs and Steely Dan, and there's tons of great new gear assessed by our expert reviewers.

You can get it online here or at Apple Newsstand from Tuesday!

We start with the terribly sad news that Jeff Hanneman, Slayer guitarist has passed away, aged 49. Hanneman died of liver failure. He had been suffering from a skin-eating bacterial disease contracted from a spider bite in 2011. Jeff was a founding member of the thrash pioneers and news of his death makes this a sad day for metal indeed.

A statement on the band's Facebook page reads: "Slayer is devastated to inform that their bandmate and brother, Jeff Hanneman, passed away at about 11AM this morning near his Southern California home. Hanneman was in an area hospital when he suffered liver failure. He is survived by his wife Kathy, his sister Kathy and his brothers Michael and Larry, and will be sorely missed. Our Brother Jeff Hanneman, May He Rest In Peace (1964 - 2013)"

This weekend Rhythm fully intends to crank up the Slayer in tribute to Jeff and the band he co-founded, and work on our metal chops.

Here's Slayer at their finest with Hanneman and Dave Lombardo at Donington in 1992.

The always-cool, live drum'n'bass pioneer Jojo Mayer has made this film of himself playing some seriously impressive grooves in various public places in New York. Inspiring stuff.

You might have heard that pint-sized pop genius Prince was looking for a new drummer for the New Power Generation recently. David Kelly, drummer with Liverpool post-rock outfit Vasco Da Gama - who you can check out in an up-coming issue of Rhythm, by the way - wasted no time in uploading this audition video for the attention of the Purple One. With his offer of making his own special mashed potato for Prince, we don't understand how he's not already occupying the NPG throne…

We've got a pair of full weekend tickets to give away over at MusicRadar/Rhythm right now! Because we love you, that's why.

If you've done a drum cover you're particularly proud of, or if you've seen an awesome one recently - email us at:rhythm@futurenet.com!