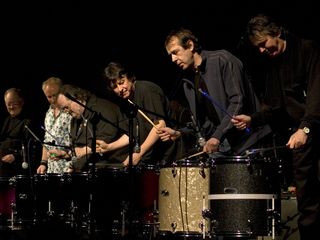 The Let There Be Drums finale (Photo by Richard Voysey)

Music For All is a UK based charity devoted to promoting the benefits of music making to young people, families and the over 50s through a series of projects. Rock Of Ages was the charity´s first fundraising live music event, which took place in Reading (UK) on 28 February and showcased talent from some of the UK´s top drummers.

Veteran sticksman Bobby Orr, Brian Bennett (The Shadows), Ric Lee (Ten Years After) and top session drummer Clem Cattini completed the big-name line-up. To end the night, all took to the stage for a thunderous crescendo of Let There Be Drums.

The show was organised by Chris Wright, Managing Director of Thames Valley Drum and Percussion retailer DrumWright. Wright expects the event to raise around £10,000 for the charity when revenue from the linked eBay auction of rock memorabilia is taken into account. The auction includes cymbals signed by Brian Bennett and Nick Mason (Pink Floyd), a masterclass with Deep Purple´s Ian Paice and a snare drum signed by four top drummers including Chad Smith.

The auction ends on Sunday 9 March so get bidding!