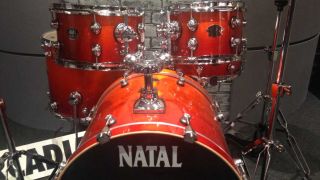 The set-up boasts some great features that have been borrowed from kits further up the Natal line, including the Pro Series double tom mount with Aluminium ball, meaning tom adjustment and placement is smooth, reliable and sturdy. This is paired with the NRM2 tom mount bracket.

There will be wrap and lacquer finishes available, with the option of black shell hardware too. A full hardware pack is also included with the kit.

Natal tells us to expect the kit around mid-summer.