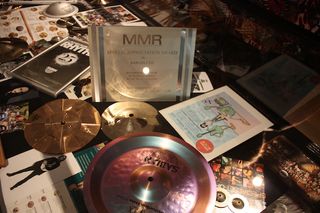 A smattering of artefacts from the New Brunswick site

Sabian has opened a museum at its New Brunswick factory, and as you can see from the picture above Rhythm is safely tucked in among the exhibits.

The museum has been opened as part of the cymbal maker's 30th anniversary celebrations and is packed full of artefacts, awards and memorabilia from Sabian's history.

"It's easy for important moments in any company's history to be forgotten as time passes, so it was important for us to start the process of archiving those moments now," says Manager of Canadian Sales & Artist Relations Terry Ryan, who headed up the museum committee. "In our case, the history of the factory is very closely tied to the history of the community. We have families who at this point have had three generations working at Sabian."

The museum is open year-round during factory tours.