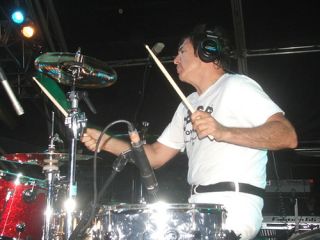 The research was conducted by scientists from the University Of Gloucestershire and the University Of Chichester. Chichester's Dr Marcus Smith reports on the findings: "There is a clear link between fitness and performance. Musicians need exceptional stamina to sustain optimum output especially when on tour".

"Footballers can normally expect to play 40 to 50 games a year.In one 12 month period, Clem played 90 minute sets at 100 concerts.When you consider the implications of touring on top of the performance requirements for high-profile drummers, it is clear that their fitness levels need to be outstanding".

Clem Burke's heart rate averaged between 140/150 beats per minute during trials - burning an impressive 400 to 600 calories per hour.

Often labelled the 'dumbest member of the band', does this mean that drummers should finally get some respect for being the fittest, and therefore hardest member of the band? Yes. Unless of course they're in some sort of jazz/lounge band. Those brush-wielding hands probably get more action setting up the kit than actually playing it.