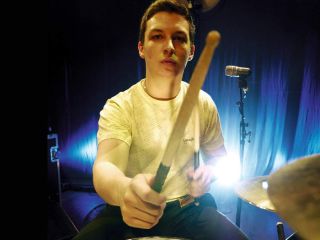 What do you call someone who hangs around with musicians? A drummer. What did the drummer get on his IQ test? Drool. Jokes about drummers aren´t exactly thin on the ground and we´re all guilty of laughing along. Hell, even a drummer would probably smirk because they´re too stupid to realise we´re laughing at them, not with them. Or are they? A scientific report published by The Telegraph thinks not.

An experiment carried out at the Karolinska Institutet in Stockholm asked 34 right-handed men to keep time with a drumstick before sitting a psychometric test of 60 questions and problems. The results were conclusive: those with the best sense of rhythm also scored highest in the mental tests. So, there you go - drummers are natural intellectuals.

The problem I have with these results is that the participants were not actually drummers - they were average Joes asked to tap a drumstick at “a variety of different intervals”. Now, I´m not saying that drummers are dumb - anyone that can keep rhythm with four different limbs at the same time must be teetering on genius - but surely, all this proves is that good, time-keeping drummers are clever and bad drummers are not so?

Oh, and before we get started with the drummer jokes - how many guitarists does it take to change a light bulb? Five. One to change it and four to stand around discussing how they would have changed it better…